schrit_tmacher Festival 2018 came to an end with outstanding success and outstanding also „THE HOLE“ with NDT1!

The 23rd edition of schrit_tmacher Festival 2018 came to an end with outstanding success!

The schrit_tmacher justDANCE! Festival 2018 came to an end and the five festival-weeks were packed with dance events, discoveries, highlights and a dance audience that an organizer and curator could ever wish for. Although this 23rd edition contained way more productions and events to give the chance to even more dance enthusiasts from near and at times also very far to purchase a ticket, almost all performances were completely sold out and sometimes already shortly after launching the ticket sale.

For the last five years, next to the “main festival”, another festival has been establishing itself continuously, secretly and not quiet at all, named “schrit_tmacher GENERATION2” that is being directed competently by Yvonne Eibig and is addressed to the youngest, the younger and young adults. A highlight of this year’s GENERATION2 is the development of a dance piece for a young transnational ensemble from Germany and the Netherlands that had the opportunity to work with professional choreographers and perform in front of a (large) audience in both countries. Moreover, there were many workshops with artists that performed in the “main festival” and for the first time a choreographers’ evening of emerging choreographers took place with a quality more than just surprising. (as we reported)

On the side the schrit_tmacher Festival is complemented by a partially very interesting series of dance films, round tables and the exhibition “TANZ PUNK KUNST” that lasted for several weeks and fitted the guest performance of the brilliant dance-punk Michael Clark and the media artist Charles Atlas from Great Britain.

During those five weeks of the festival there were probably over 16,000 visitors in Belgium, the Netherlands and Germany that literally flooded the exciting venues with their presence and enthusiasm for dance alike.

Maybe latest after the 25th edition it might reach out the ministries in Dusseldorf on what a significant and transgressive festival for contemporary dance has grown here in the Euregio. This would be desirable especially for the ministry, its administration and politics.

As the festival organizers Rick Takvorian, Bas Schonderwoerd, Janneke Schmeitz and Stefanie Gerhards do not like to point it out and would never want to have an artist stand out from the other participating groups; it stays the privilege of the review to do it: 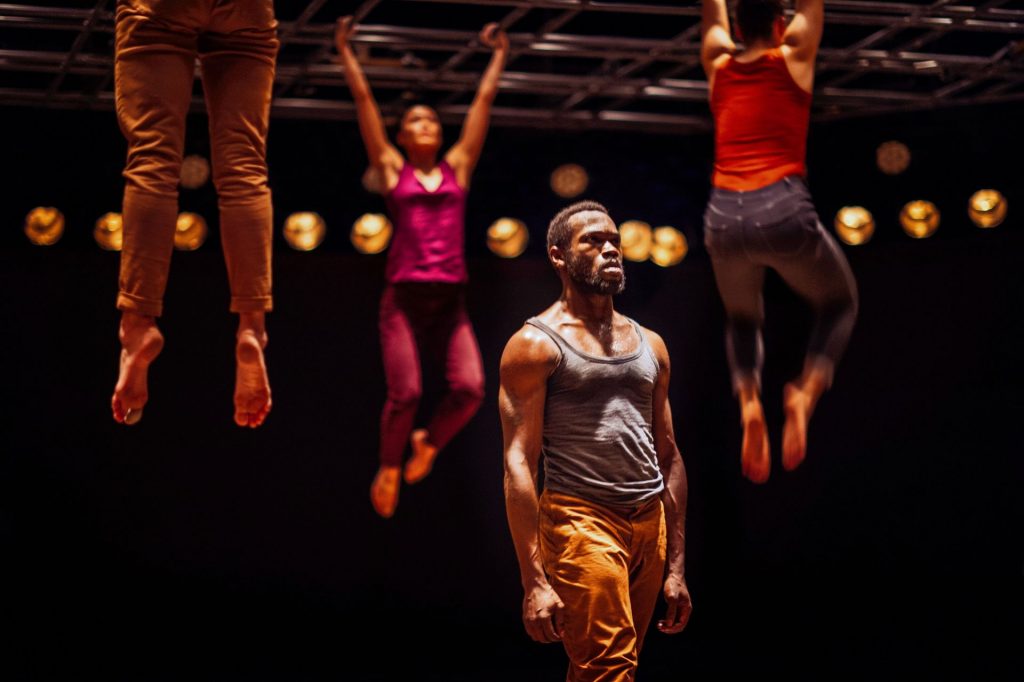 Ohad Naharin’s “THE HOLE” with the NDT1 was the absolute highlight of schrit_tmacher 2018 Festival.

Ohad Naharin’s “THE HOLE” is overwhelming. While images and emotions are flooding the scenery, the audience is almost 360 degrees encircled from the two times eight female and male dancers. An unprecedented, physical viewing experience that leaves nobody untouched.

It might be one of the most direct, intimate, grasping and beautiful pieces of contemporary dance art that the organizers of the 23rd edition of schrit_tmacher justDANCE! Festival presented nine times to their audiences in Parkstad Limburg Theater in Heerlen.

We are referring to Ohad Naharin’s “THE HOLE”, created in 2013 for the Batsheva Dance Company that has now in 2018 been rehearsed and performed with the wonderful dancers of the NDT1. It is a present and not just a presentation, as actually already in its creation this piece had been considered as not performable outside of the studios of the Suzanne Dellal Centre in Tel Aviv due to its complex requirements.

That in the end it was made possible is thanks to the fact that it is a coproduction of the Netherlands Dance Theater and schrit_tmacher justDANCE! Festival which therefore underlines its significance as one of the most important and biggest dance festivals in german-speaking countries and beyond. On the occasion of her opening review our critic Nicole Strecker assigned the festival with the superlative “most stubborn dance festival” – and that in the most positive sense because the organizers of the five-week-long dance event do not need to open the festival with their top-class companies like e.g. Hofesh Shechter, Ohad Naharin, Sidi Larbi Cherkaoui or Michael Clark that were all part of 2018’s edition. 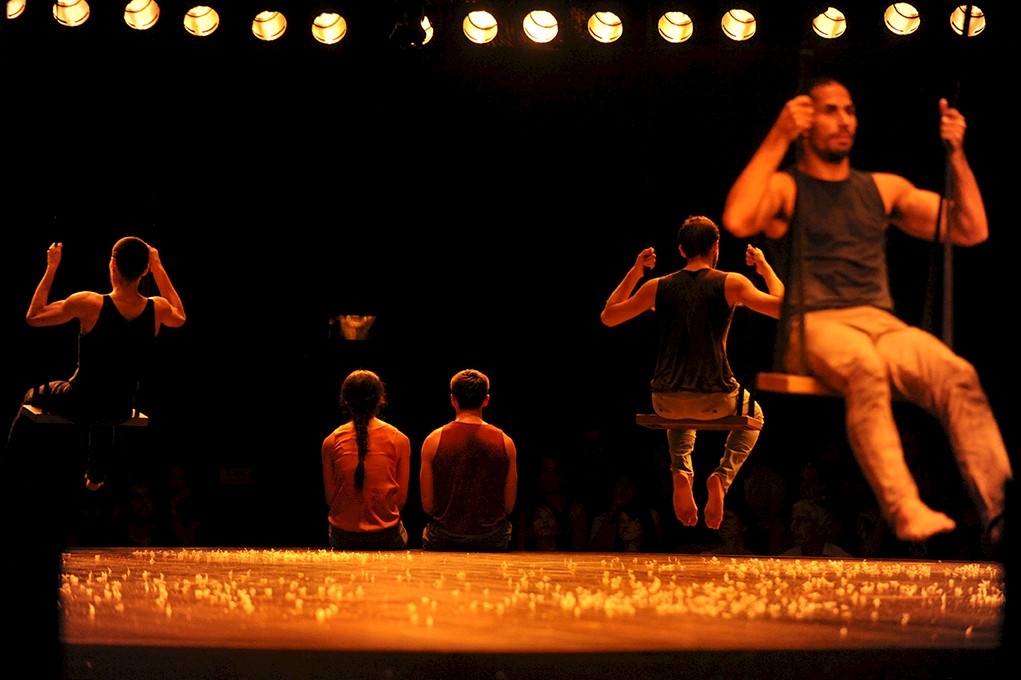 “THE HOLE” is breathtaking and the reasons for this are multiple. The spectators are sitting in an octagonal room in three octagonally arranged rows around the octagonal stage that has a diameter of eight meters. Behind the third row a bar is rising above the heads of the spectators that had not been visible before and that becomes now the performance space for the eight female dancers that before had been standing with theirs backs to the respective wall as if they were statues of antique goddesses or priestesses. Absolutely out of the blue they are, simultaneously, hitting against their walls and open up a series of images and movements with a nearly unbelievable yet authentic precision that can be described as intuitive and animalistic only. It is not long since those images were carved into our retinas that eight male dancers catapult themselves onto the stage out of nothing and as much unexpectedly. For an hour and an arm-length apart from us the dancers will let the audience be part of a story that is none and that anyway we would like to perceive as our own. Full of explosive tenderness, passion and fantasy the protagonists are dragging the spectators into a world that is unpredictably and continuously connecting heaven, earth and its interior in the most literal sense: above their heads, at their feet or on direct and immediate eye-level. Therefore, as so often with Ohad Naharin, it does not matter if it is the men or the women that determine the actions on stage. In “THE HOLE” it could be witnessed always twice on the same day in Heerlen, when then the gender distribution of the actions on stage had been reversed in the exact same choreography. 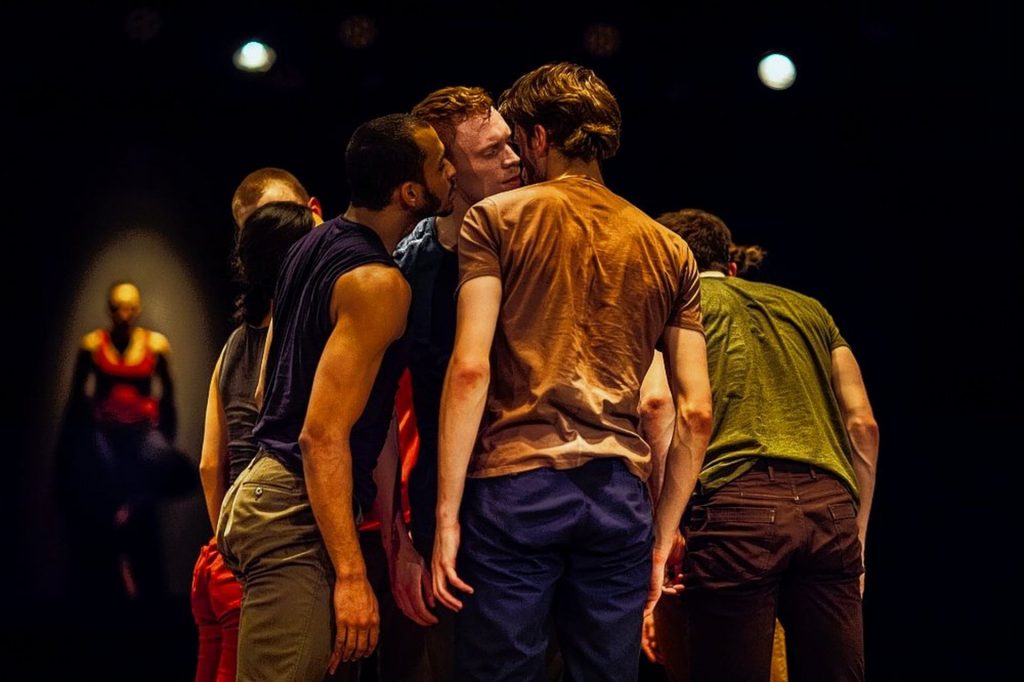 The number “eight” becomes a vertically upright lemniscate. Everything seems permanently in flow, beginning and end extend themselves in the imagination to an infinite whole.

In the end the completely sold out nine performances in the frame of the schrit_tmacher Festival turned out to be yet too few as the majority of the spectators would have liked to experience only too much the respective other version of the piece.

“THE HOLE” is thrilling and leaves you speechless at the same time. In the stream of images and emotions the audience is almost completely encircled by the two times eight female and male dancers. An unprecedented, physical viewing experience that leaves nobody untouched. It is the absolute highlight of this year’s festival that lets dance enthusiasts from the Belgium, Netherlands and German border regions and beyond make a pilgrimage to Eupen, Heerlen and Aachen.

Maybe it is more than just a beautiful coincident of symbolism that the dome of the rock in Jerusalem as well as the Palatine Chapel of the Dome of Aachen were built around a central octagon just as in Naharin’s “THE HOLE”. 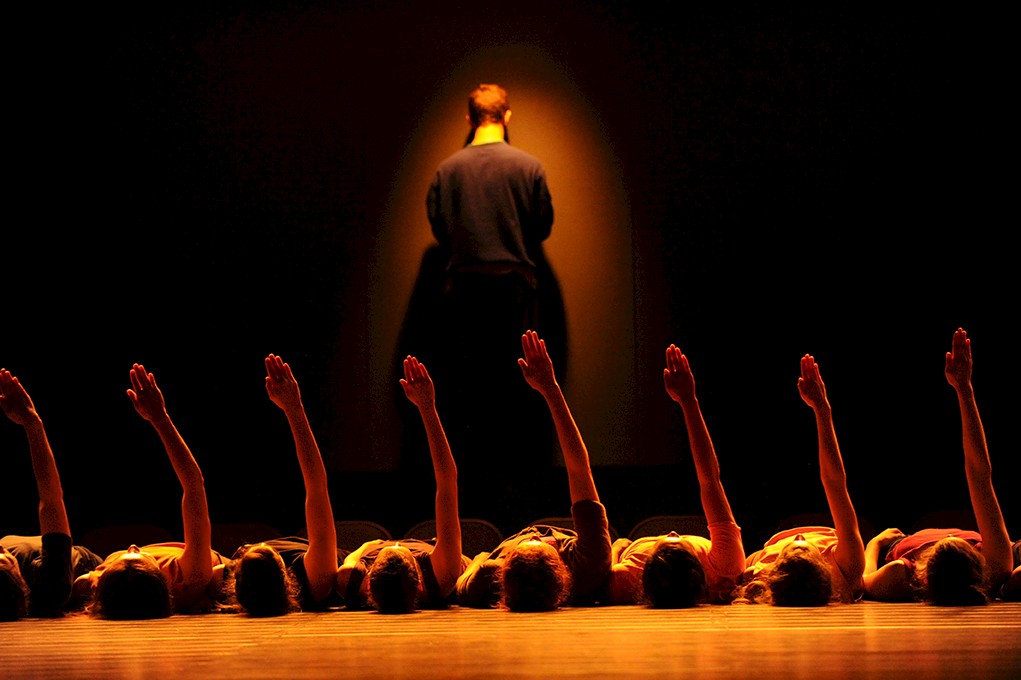