The Tears of St Peter

Co-production of the Nederlands Kamerkoor, the Dance Company Nanine Linning with the Ukrainian-born dancer Alexandre Riabko, soloist of the Hamburg Ballet

Shortly before his death, Orlando di Lasso (1532-1594) composed his masterpiece „Lagrime di San Petro“ (The Penitential Tears of St Peter), a work that ranks among the musical highlights of the Renaissance.

After the previous cancellations due to the Corona pandemic, the co-production of the Nederlands Kamerkoor and the Dance Company Nanine Linning with the Ukrainian-born dancer Alexandre Riabko, soloist of the Hamburg Ballet, who has taken over the role of Marjin Rademaker, can finally be performed in theater.

Choral music and dance unite in a danced oratorio of this extraordinary performance, created in collaboration by Tido Visser and Nanine Linning.

The seven singers are encased by glass columns. This gives them a multidimensionality in presence and absence at the same time. This is further supported by the hoods of their warm-colored costumes, with which they switch fluidly in between anonymity and empathetic attention to the dancing Peter. This is somewhat reminiscent of William Wyler’s „Ben Hur“ when he finds his mother and sister in the valley of the lepers and outcasts. 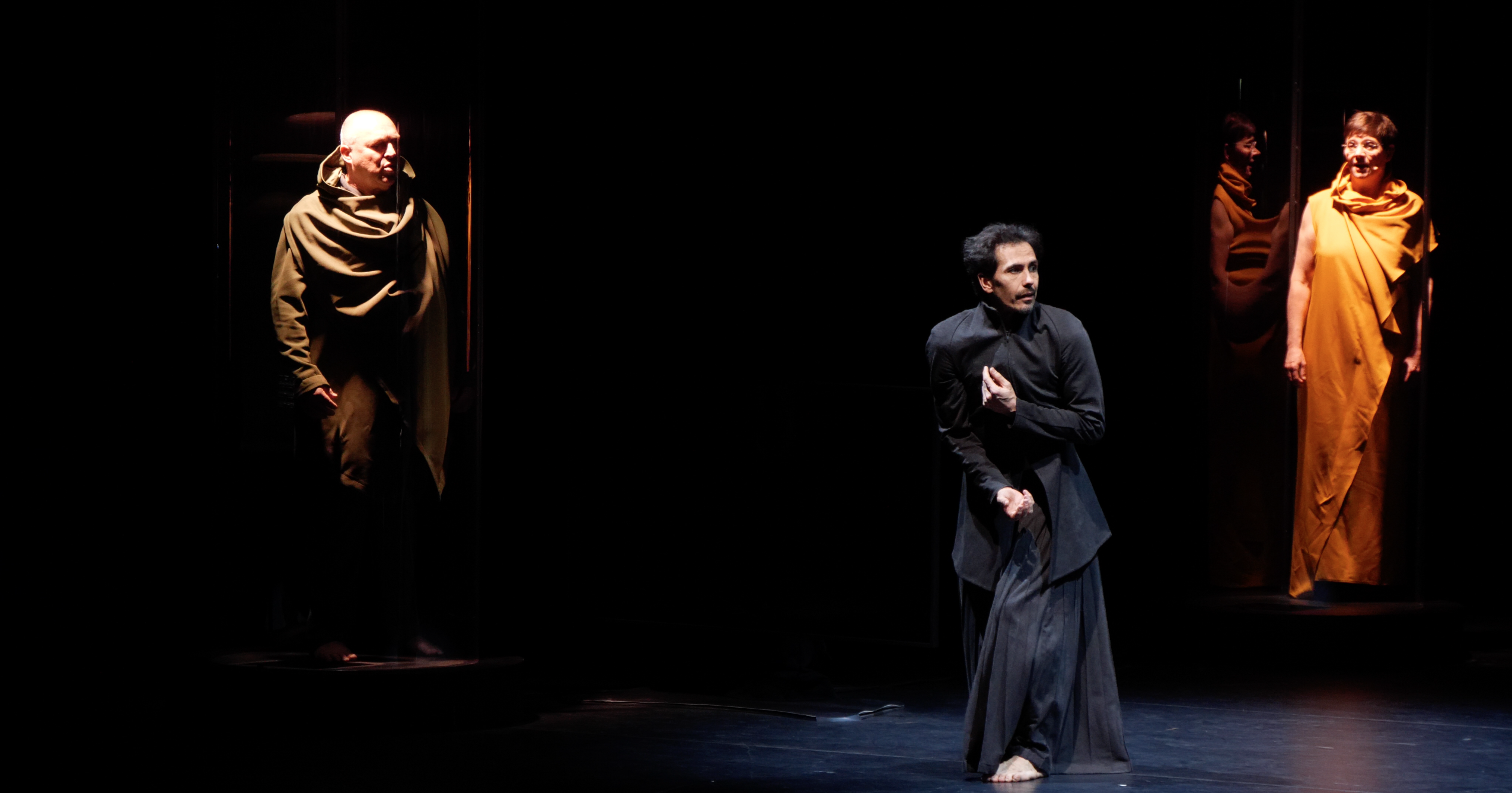 The piece begins quite gently in the dark with the voices of alto, two sopranos, two tenors and two basses, before the sequence of twenty madrigals for seven voices, with Peter Dijkstra as principal conductor, and their impact is allowed to unfold on the wonderful stage in Kerkrade.

This story is undoubtedly dramatic, too dramatic perhaps for such a wonderful spring afternoon but yet we are approaching Easter… this includes the drama of Peter’s denial of Christ, the aftermath of which we can witness here. Peter was one of his most faithful disciples. He denied him three times out of fear for his own life when asked if he knew Christ. The „Tears of St Peter“ are about guilt, remorse and atonement, about making visible the inner topography of Peter.

Alexandre Riabko is an excellent dancer, who is experienced in exploring characters in movement, in dance, as he has impressively demonstrated not least in Neumeier’s „Nijinsky“. His Peter is first and foremost a doubting one, a man of the (later) church, the „priestly“ robe wants to let us know, and which catapults the spectators temporally somewhere into the very late Middle Ages, the time of di Lasso, – costume designer Irina Shaposhnikova and set designer Pink Steenvoorden are responsible for the visual design – a temporal location that does not necessarily make the empathetic relation to the happenings on stage easier. 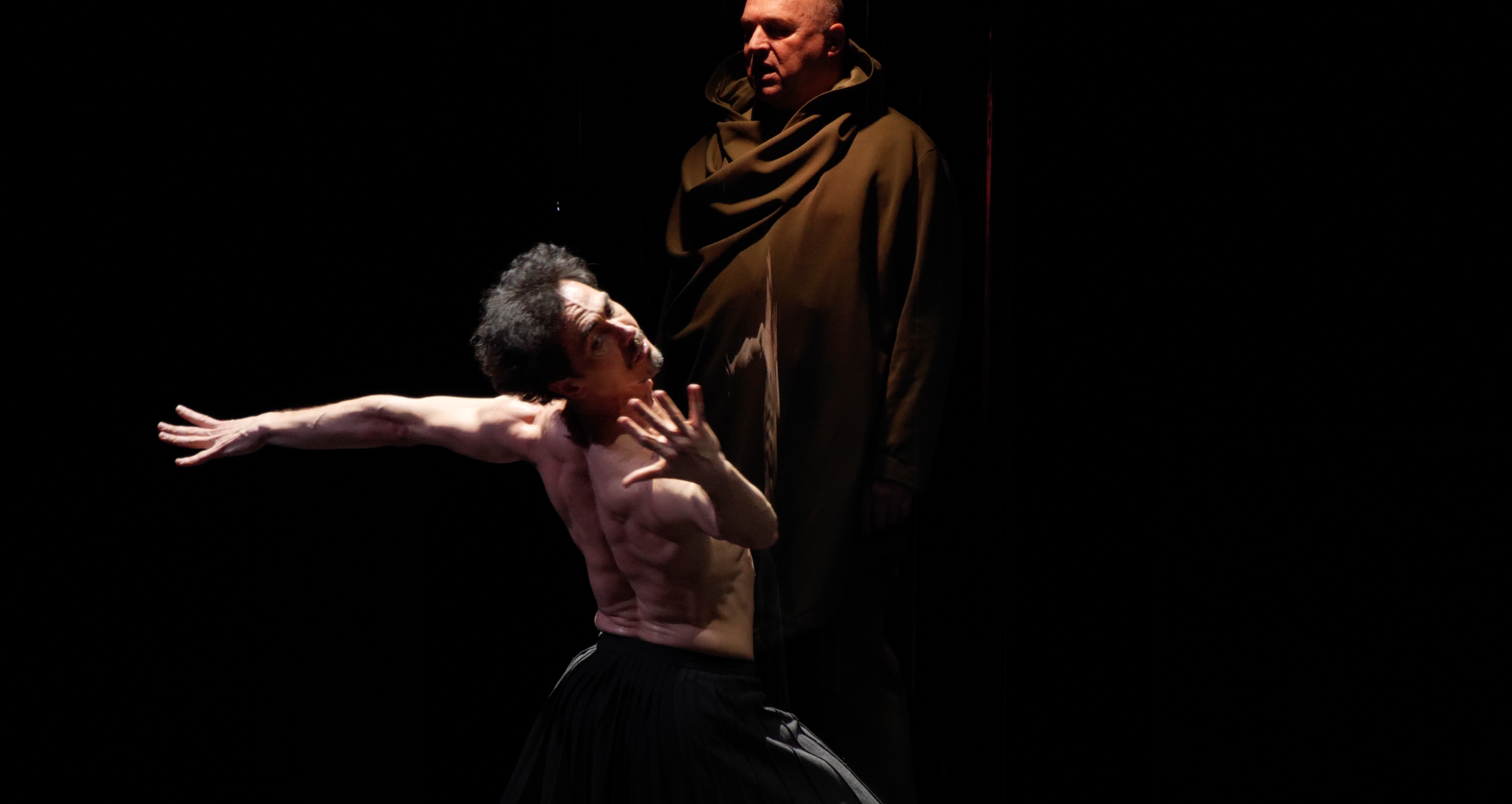 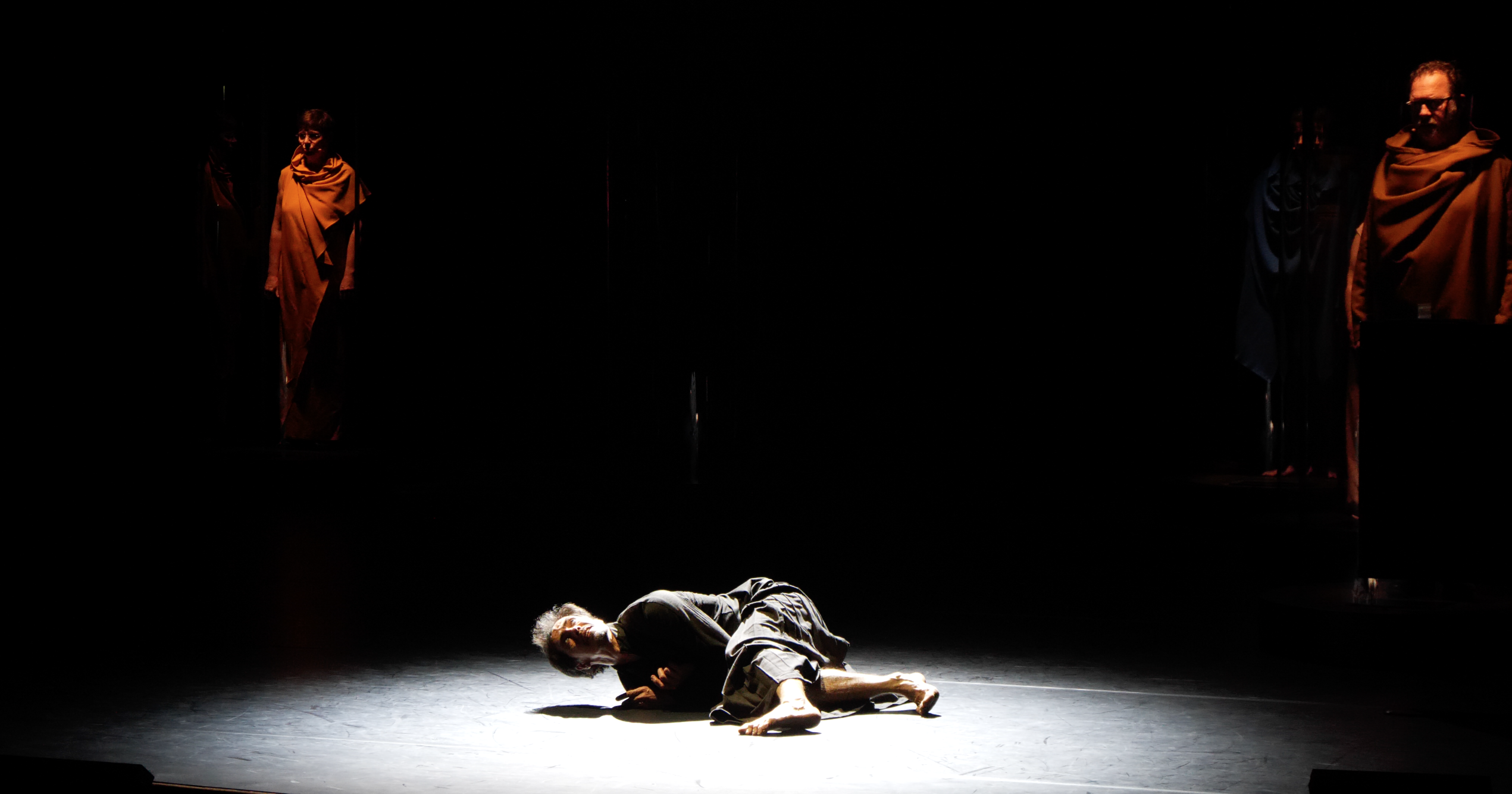 This seems to lead the staging duo to an extended temporal resolution:Between di Lasso’s composition, there are a few interludes in which five singers can be seen on screen. Close-ups in black and white with a lot of contrast and animated text fragments. Shortly before the ending, these „banshees“ even kneel alive in front of the striplites at the edge of the stage, while Peter gets rid of everything earthly, peels himself out of his clothes and drags himself „naked“ to his symbolic crucifixion in one of the now empty glass columns, after having carried this cross symbolically and for a long time in silent suffering.

This is exciting but dangerous. The magic of the theater is able to develop its own chronology and flow without reproducing the scenic fast pace of our digital illusions but as soon as those elements are made use of, the architecture might start to falter.

The skills of all the artists involved bravely resist the collapse.

It is extremely kind that the text of the „Lagrime di San Pietro“ has been made available as projected subtitles in Dutch translation. Its poetic beauty can thus be grasped, although the ideal form must still be found. 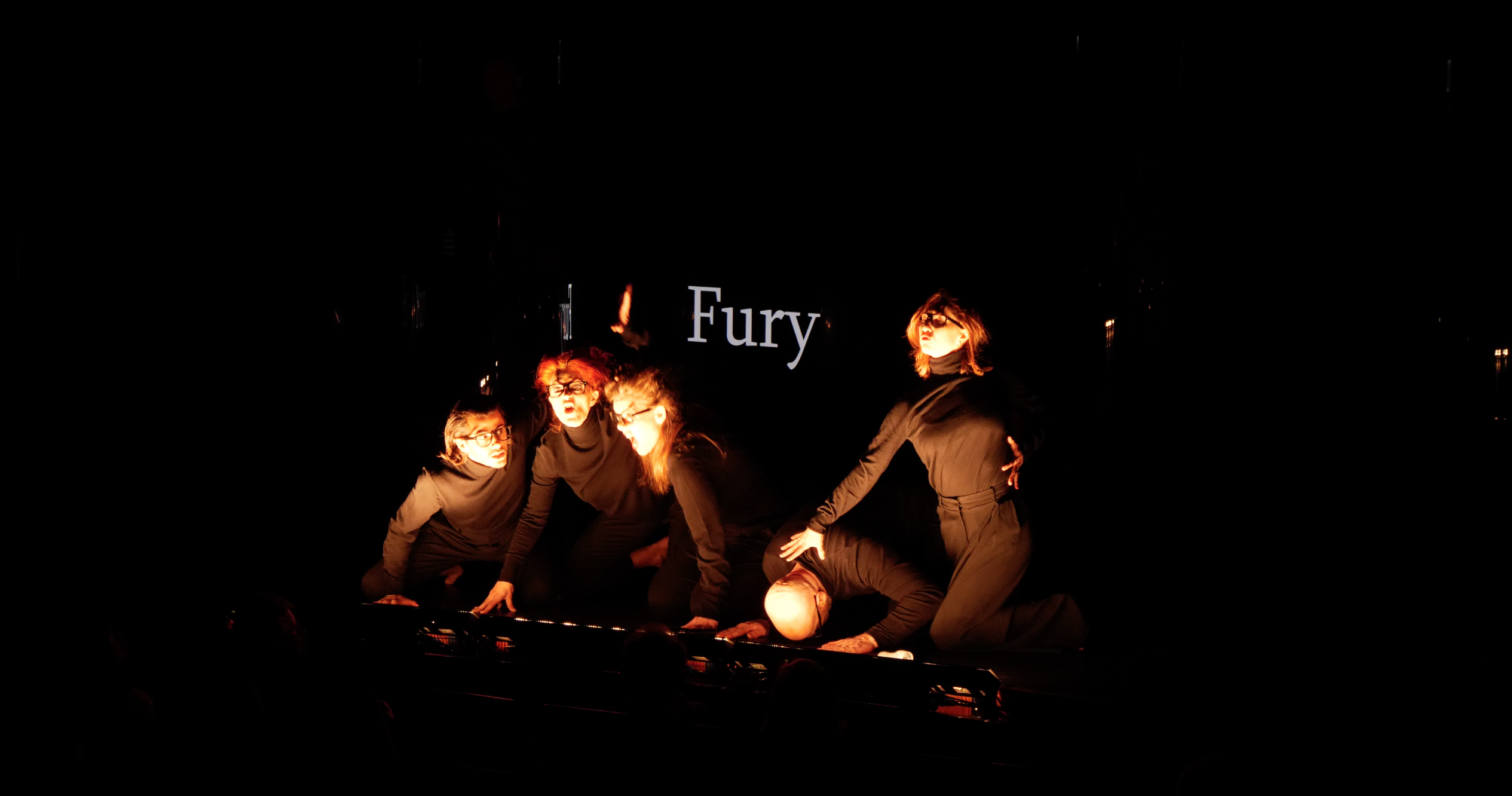 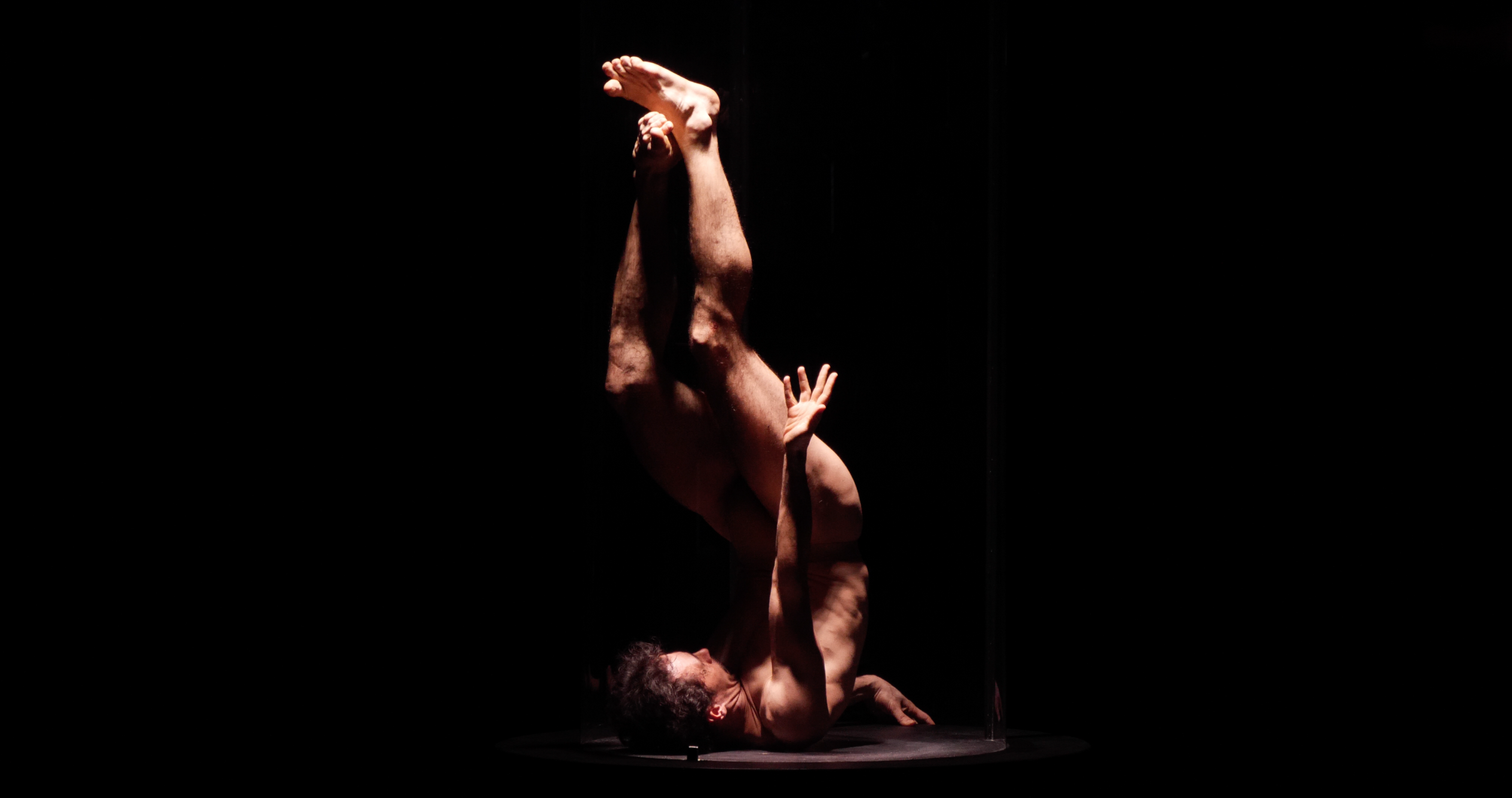