Almost ten years have passed since its world premiere in London and Sidi Larbi Cherkaoui’s “Sutra” is still fascinating the audience and is one of the highlights of schrit_tmacher justDANCE! Festival 2018 at Parkstad Limburg theater in Heerlen.

“Sutra” means “thread” and in Hinduism and Buddhism stands for a collection of aphoristic verses that are interlinked via a topic they have in common.

The piece alike unfolds itself like a series of verses that starts with a young monk and a dancer sitting like chess players bent over a miniature model of the stage; or are they gods that play with the fates of humans,- or is it Dante and Vergil sitting here? 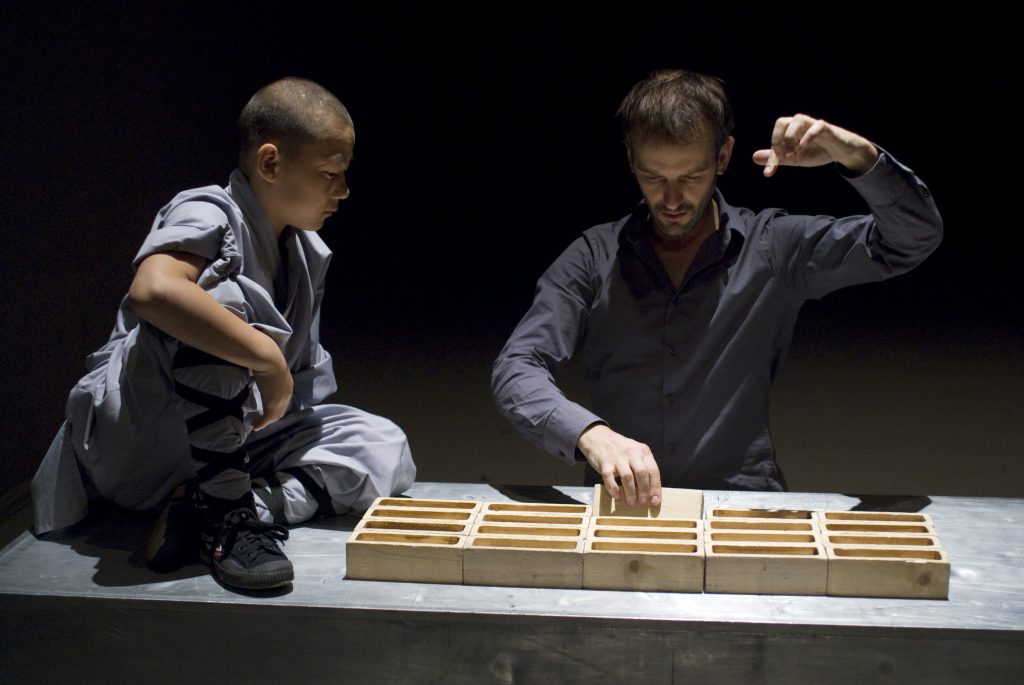 Soon they will dive into the life-sized world stage of the sculptor Antony Gromley whose brilliance is to be found in its simplicity: wooden boxes like open head-high coffins, simple bases, prisons, necropolis and trapdoor to another world at the same time. Dominoes and then again petals of a lotus flower. And when the monks are carried on the shoulders they become crosses and metaphors of oppression.

The piece speaks of development and destruction, yet even more of transformation.

“Sutra” is a journey between western and eastern culture and the attempt of a collective contemporary creation that is looking for a connection of the two cultures on eye level yet still remaining unchanged. And it is an exploration of the other, also the other body.

From there with great sensitivity Cherkaoui is spinning two threads that seem to orbit and intensify one another although single elements stay visible at all times and therefore do not want or cannot (yet) become one entity.

It is mostly fascinating this contrast of the almost fragile dance movements in the soli of …. and the powerful martial movement sequences of the Shaolin. A feeling of foreignness stays ever-present, albeit you realize at some point that both pursuit the same spiritual stream that moves cultures as bodies alike.

“Be like water…”, was one of Bruce Lee’s doctrines.

The Flemish-Marrokkan – so bi-cultural – choreographer Sidi Larbi Cherkaoui has ever been dealing with the question of what happens when different cultures and religions come together. He has received awards for this (e.g. the prestigious Kairos-Award) and the label “spiritual choreographer”. Although he himself emphasizes the physicality in his works and that, if at all, he sees himself as “being steeped in by the spiritual belief in the body” – nevertheless, in many of his works he lives up to his reputation as the ‘metaphysical inspired integration researcher’ among the choreographers. 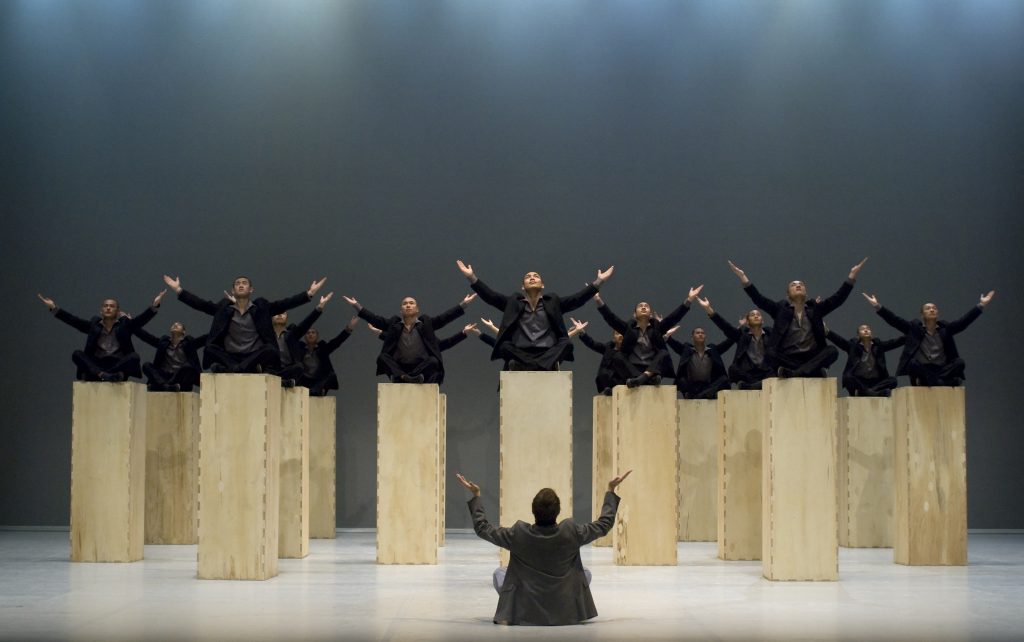 Cherkaoui traveled to the famous convent of Henan to the Shaolin monks: up-leaping bodies like springs, flight attacks, shadow boxing fights – one knows their martial arts from certain shows, it even conquered the movie theaters. Also for Cherkaoui it has been something like Bruce Lee ‘in real’, the movement art of one of his childhood idols in a spiritual sense. In his piece Cherkaoui undermines the expectable show-off parts of the Shaolin. He jars the demonstration of control and uniformity with the presence of another, a non-Asian body. In the first version it had been still himself who danced the “troublemaker”. With his incredible rubber-body he folded himself into one of the coffin-like boxes which are available for each performer on stage. Or he literally turned himself upside down while his body looked so limp that he appeared to be a heavy bag – topsy-turvy world. In general: Cherkaoui’s assaults on the head. Even the greatest dancers like to spare this body part. 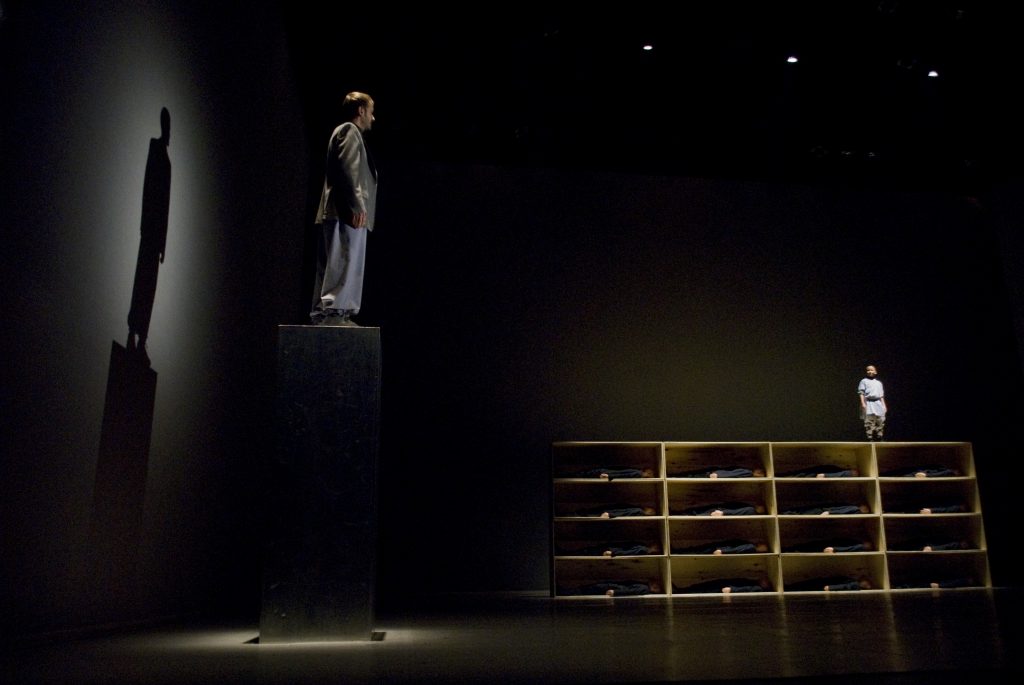 Not Sidi Larbi Cherkaoui. He shows very physically how thinking makes you mad. He can let his head flap as if it was only linked to the spine by one single thin thread. Like in one of his best pieces, “Zero Degrees”, a cooperation with his dancer colleague Akram Khan, where the latter bounces Cherkaoui’s head onto the floor like a basketball – highly virtuous brutality. And finally his “head-mastery” depicts the roots of his dancing: in a casual hip hop manner he is turning on his head from time to time as if it was the most natural form of a pirouette – and for him it is indeed more evident than the ballet version. At the age of 17 he imitates Streetdance on MTV and performs in shows. When in 2000 he presents himself to the dance scene in the company of Belgian star-choreographer Alain Platel, he is already a movement-prodigy: Flamenco, the staccatos of Indian Kathak, circus artistry and dancing point in sneakers – Sidi Larbi Cherkaoui masters any style you can imagine. He wastes himself on stage; he is an obsessed whom you love for his courage and his self-abandonment. And who as a choreographer, serious and imaginative like a hypersensitive child, only asks the most complicated and greatest questions of our times – as the ones of juxtapositions and paradoxes of globalization.

You laugh, you ponder, you are lost in reverie in his pieces, astonished about his sensitivity, his tireless tracing of what the ‘other’ culture, the ‘other’ body could be. With his choreography “Sutra” he gave the unforgettably, powerfully cliché-free answer. 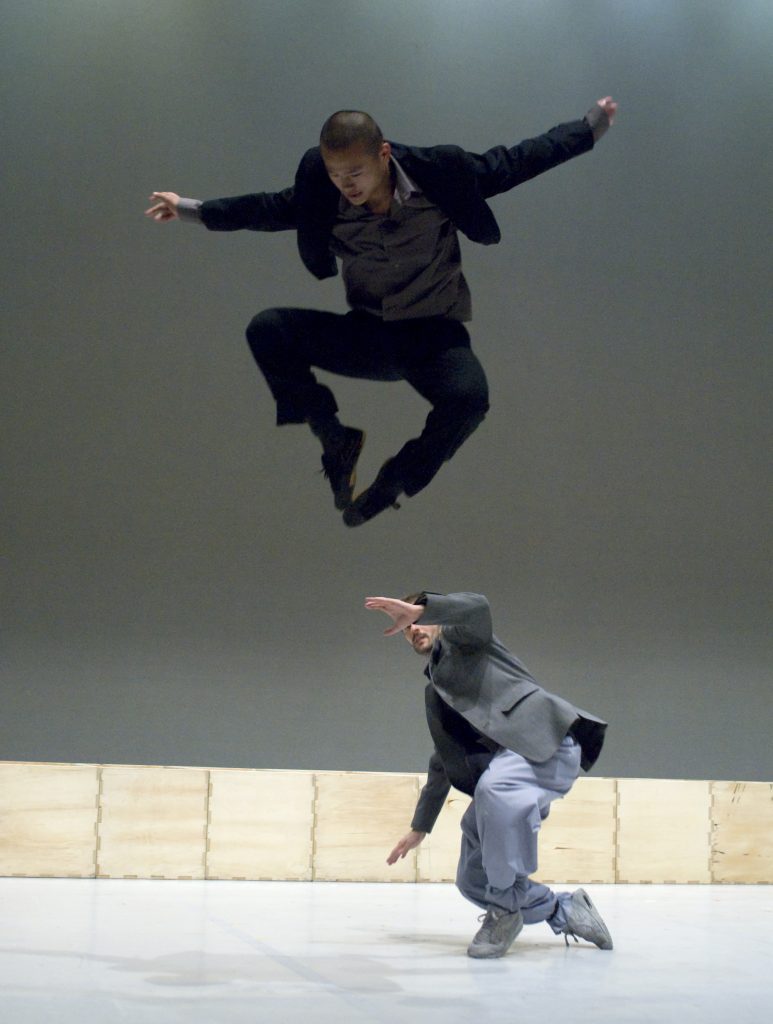