On International Women’s Day the Mexican dancer and choreographer Tania Pérez-Salas presents two of her pieces at the Euregio of schrit_tmacher. It is a great decision dramaturgically to present “3. Fourteen Sixteen“ alongside “Macho Man XXI“. The evening creates a link between baroque times and today and is dealing with social topics that could not be more highly topical.

Both of the great Baroque-Louis’s spent a great time. The 17th and 18th century was a time of extensive dancing, celebrating and drinking at the French court. One pompous feast after the other. Well, why not. Especially the Sun King Louis XIV knew how to indulge in the pleasant sides of life. He loved dance and ran riot continuously. The last king of France, Louis XVI, was interested in very different things. As soon as he ascended the throne he was convinced to be not only the king of France but of the whole world.

Tania Pérez-Salas who in 1994, in her early twenties, founded her own company, addresses in the piece “3. Fourteen Sixteen” (2002) nowadays’ time. Back then it had been designed for the Mexican Compañia Nacional de Danza and for schrit_tmacher it had been performed by her own company at Fabrik Stahlbau Strang in Aachen. Accompanied by the sound of Marin Marias, Girolamo Frescobaldi, Antonio Vivaldi, Francois Couperin and Giovanni Battista Pergolesi – altogether eleven dancers bring us back to that time.

The subtle costumes reflect in their clarity perfectly upon these magnificent and pompous times. They range from white fabric to black leotards to expansive robes. They were designed by the Mexican costume designer Eloise Kazan who had also created the worlds of fabrics for “Cuando Los Disfraces Se Cuelgan (When The Disguises Are Hung Up)” of Delfos Danza Contemporánea. In “3. Fourteen Sixteen” dance and costume harmonize most beautifully when the dancers flow in red robes across the stage in a complex choreography.

Tania Pérez-Salas allowed herself a lot of freedom in this 20-minute piece – and it worked out perfectly. The circulation, the infinity and the steady repetition of history – the number Pi (3.14159…) already refers to that in the title – can be transferred directly into nowadays’ time; regarding the megalomania of recent governments who probably wished to have their own royal household and live in their own realities. It also refers to the decadency in which the rich own percent of the world’s population live and celebrate. 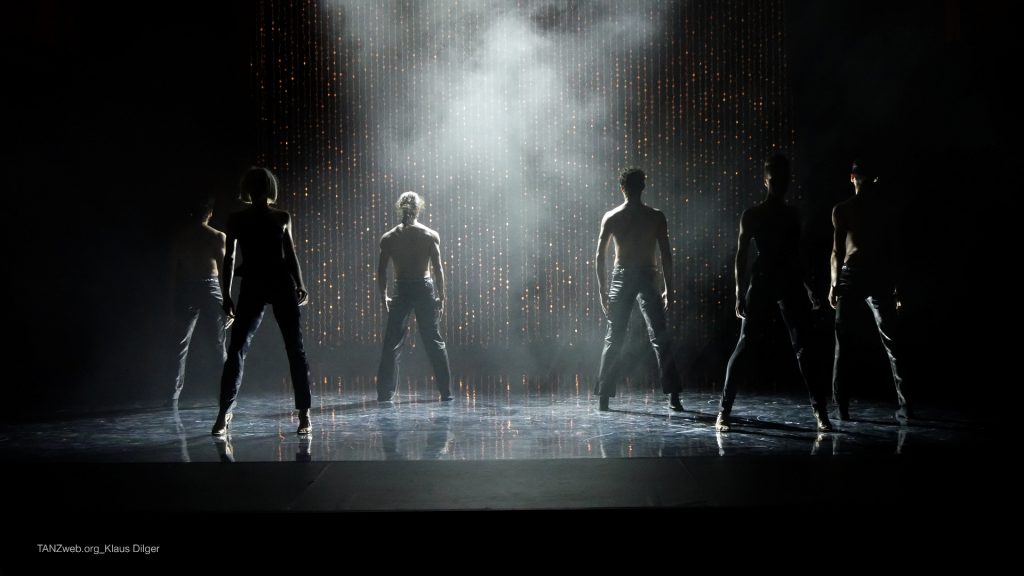 The second part of the evening takes up right there. As the title in the conceptualization of the piece in 2014 was still “Made in Mexico” it now refers as “Macho Man XXI” to the worldwide obvious. It is a matter of the woman among all those Trumps, Weinsteins, bosses and in general embossed men.

The opening of “Macho Man XXI” is incredibly strong. A homogenous formation is marching, stomping on the floor and is changing position meticulously, equally gymnastically. In white shirts and black blouses the dancers become an androgynous group. A community in lockstep and equal posture. Only if there was not this tiny distinction that reveals itself visibly at some point in dance and body. Gender. The biological-sociological sex drive transforms the men into monsters that rip off the women’s clothes. They bring them to heel, use and abuse them. This discrepancy in the dominance, strength and power is now going through several images, in Mexican folkdance that appears sexy at first glance but in its essence contains the submission of women into the arms of men. Or in the representation of a typical boss in his office chair who makes women compliant. Yet, with “Macho Man XXI” Tania Pérez-Salas by no means presents men as culprits and reason of female sorrow and suffering. Stereotypes like popstars are just as much instinct-driven villains as cowboys.

The great heterogeneous ensemble performs those images fantastically and unfolds their individual differences as a contrast to the strong beginning scene. You want to see all of those twelve dancers – Jose Ramon Corral, Edisel Cruz Gonzalez, Ana Elisa Estrada, Nicole Erickson, Renato Gonzalez, Alicia Hauffray, Allie Mae Gee, Eduard Martinez, Sarah Matry-Guerre, Jose Roberto Solis, Diego Vazquez and Myrthe Weehuizen – all the time and all at the same time. Tania Pérez-Salas says herself about her group of dancers, „I like having different personalities, bringing a mix of faces onto the stage so that each character stands out. I don’t like it when the faces all blend in together.” Which they never do – under no circumstances.

You will not only find great bodies on stage. Just like Delfos Danza Contemporànea, the Mexican dance evening is loaded with scenes, symbols and topics. Here, certain strong moments always stand out. For example when the men stand with their legs apart above the women lying underneath and fix them with their gazes and just trip back and forth. At the time of the premiere the hashtag #MeToo did not exist yet although it would fit perfectly to some parts of “Macho Man XXI”.

In the course of the piece a clarification in terms of clichés and stereotypes of gender issues unfolds. And although it is lacking a clear attitude towards this complex topic the evening is an important contribution to the debate that will have a lasting influence on our times and society. Exactly on the International Women’s Day the company of Tania Pérez-Salas from Mexico is having its guest performance with an evening that makes the little distinction apparent which nowadays is bigger than ever.