People have the Power

Corona put a spoke in her wheel. For months she had been commuting in Germany, in between Frankfurt and Essen, to Weimar, Munich and Berlin. She is like trapped, owning the passport of a refugee. No way back home for her. China’s doors are still closed. The first „free choreographer“ of the People’s Republic of China to gain recognition in the West, is behind time in her solo „I Am 60“.

As on May 25, she turned 62 already. On stage she is walking through her native city of Kunming. Fascinated and equipped with a small camera, she is observing the fast, athletic running exercises of a clearly elderly lady, who occupied one of the gymnastic apparatuses that are set up in many public places and is „running“ her – knee-friendly – daily course on the spot. Sprinting. Wen Hui places her camera on a wall, enters the picture herself and bravely and determined starts running after the agility of the older woman. This happens after an hour full of sad stories from China. Finally, she is becoming active on stage, radiating energy, doesn’t want to let it get her down any longer. In lip-synch he is belting out Patti Smith’s „People have the power“. 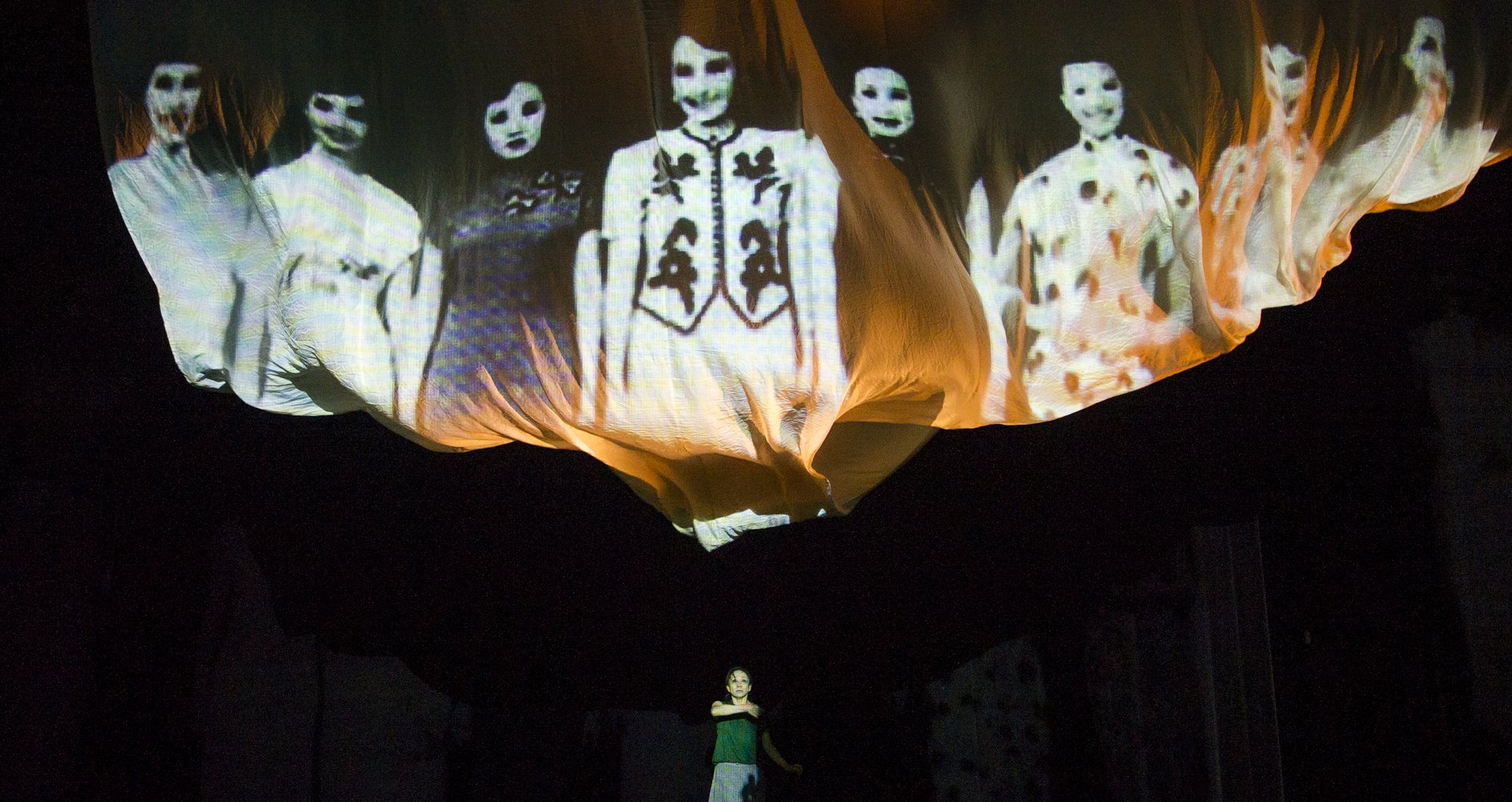 She belts out the socialist slogan par excellence; even in China it would be impossible to censor her. The song is rebellious enough for older people, yet only this evening – premiered in Weimar in 2021 and now as part of Ruhrtriennale at PACT Zollverein Essen –  it awakens from a strangely melancholy, autobiographical vanity. It had not been intended that way.

Wen Hui wanted to create a sketch of the hardly existing feminism in China with four female dancers. People are equal – this is the basis of socialism. Its myth even claims the equality of women. Yet not in China. Here, women work more hours than men, receive significantly lower wages, and only two percent make it to a managerial position. There is no equality in China. There are the first beginnings of it starting with the now 30-year-olds. There were arrests because women protested with nude upper bodies. In early February 2022, gruesome photos and video sequences went viral showing a chained woman who had given birth to eight children in a village in Jiangsu Province and who had been repeatedly raped by the men of the village. There are arrests as women are seen by the state as a key role in China’s #MeToo movement when they gather outside a courthouse as soon as there is a woman’s sexual harassment complaint heard there.

Wen Hui wanted to bring these female activists on stage. But the pandemic had shattered the world in China more than anywhere else. No one talks openly on digital platforms. Every word uttered is flushed through China’s artificial intelligence, looking for deviation. 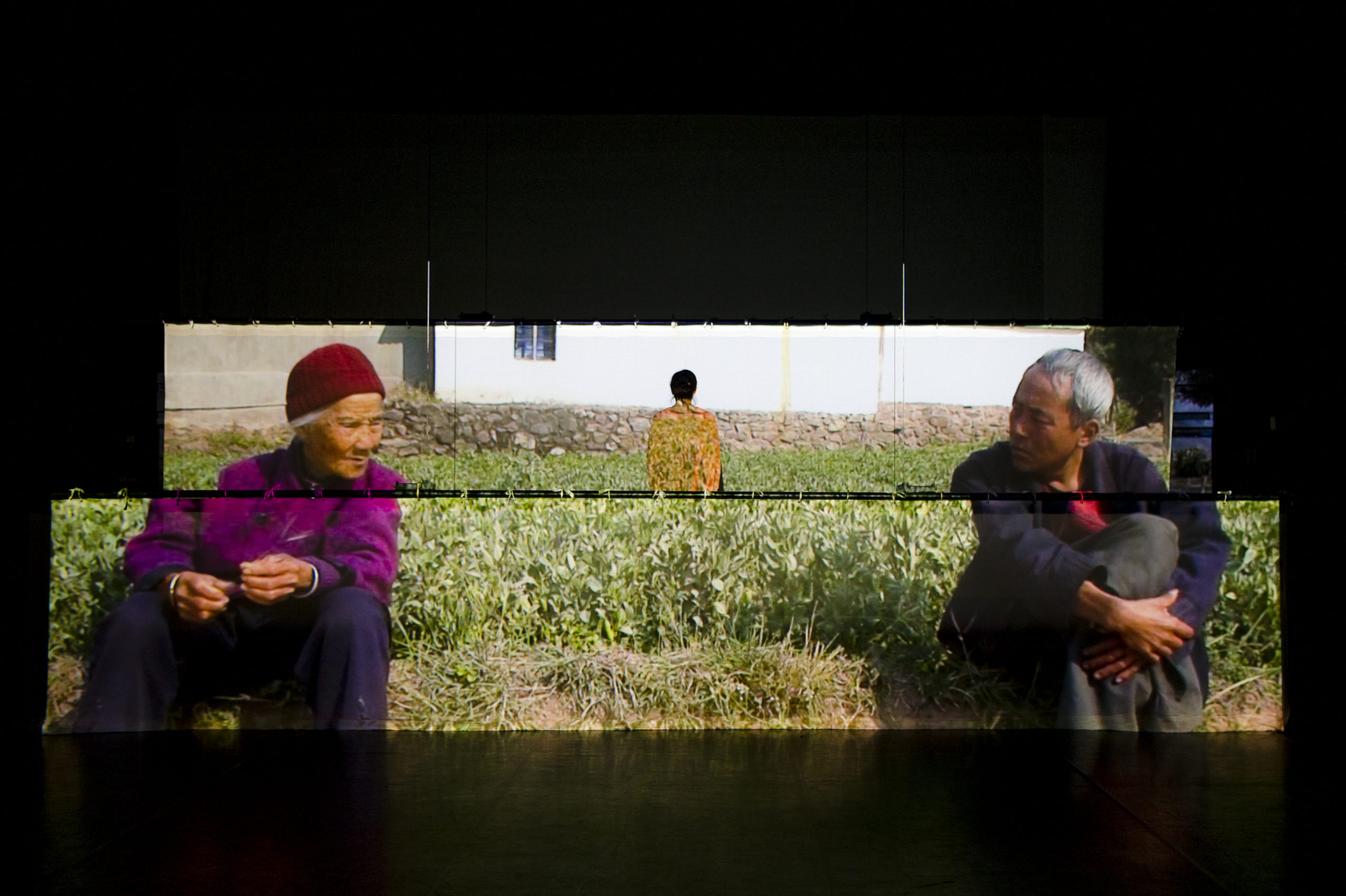 „I Am 60“ is not just by title an autobiography. Further, it is self-protection. It is her story. In the mid 1990s Wen Hui founded the Living Dance Studio with her former husband, documentary filmmaker Wu Wenguang. Only few kilometers from what was then Beijing’s airport, this studio produced a unique mix of documentary films and dance – blending dance as a form of physical rebellion against the camera’s cool gaze on reality. Both wanted to bring art into contact with society – after stays in New York and with Pina Bausch, the will to relate social grievances and dance came up, in order to see dance no longer as escapism when facing urgent problems. Until 2014, the separation from her husband but also because of ground prices, the company was forced to leave their studio. Wen Hui can be seen in a shot from that time. Amidst the moving boxes, she danced the grief of her losses.

There are three screens on the stage of „I am 60“, one at the very back, in front of that one a barrier chest high, just as in a soccer stadium, as well as a sail hoisted and that can be moved manually, in order to appear in Romain de Lagarde’s lighting design again and again as if the images projected in black and white were burning.

In this setting, Wen Hui moves like a puppeteer who, tiny, with her hands raised, seems to be dancing in the grass between her great-aunt and her son in the mountain village of Da He Bian in Yunnan. The two of them talk exaggeratedly about Wen Hui, still small at the time, and her eating habits. Four times Wen Hui had been at her „Third Grandmother’s“ house, always talking about the coming doom, as if Wen Hui didn’t trust her story, as if she had to insert cliff-hangers. She then presents historical photos and the supposedly ideal world of Chinese cinematography from the 1930s and 1940s – ghost films that are set against a backdrop of a looming disaster. Presumably Mao and his land reform are meant, conscripting millions of urban children into farm labor. Wen Hui was spared with this labor because her father enrolled her to study dance at the Yunnan Conservatory in 1973: artists and athletes were exempt from agricultural service.

She studied revolutionary propaganda opera, classical ballet and traditional dance. The children danced with the Mao Bible in their hands to get good grades. Dance was a form of military service. „Our bodies didn’t belong to us then but to the state“, says Wen Hui, who went abroad, emancipated herself, yet now doesn’t give the impression that emancipation has succeeded for her. On the contrary: again and again, there are film sequences showing Wen Hui standing on a street that she cannot cross. No car stops to allow her to reach the saving shore on the other side. This is also her final image. Between two screens in front and behind, she is standing in the middle of the road – and no path anywhere is leading to freedom. 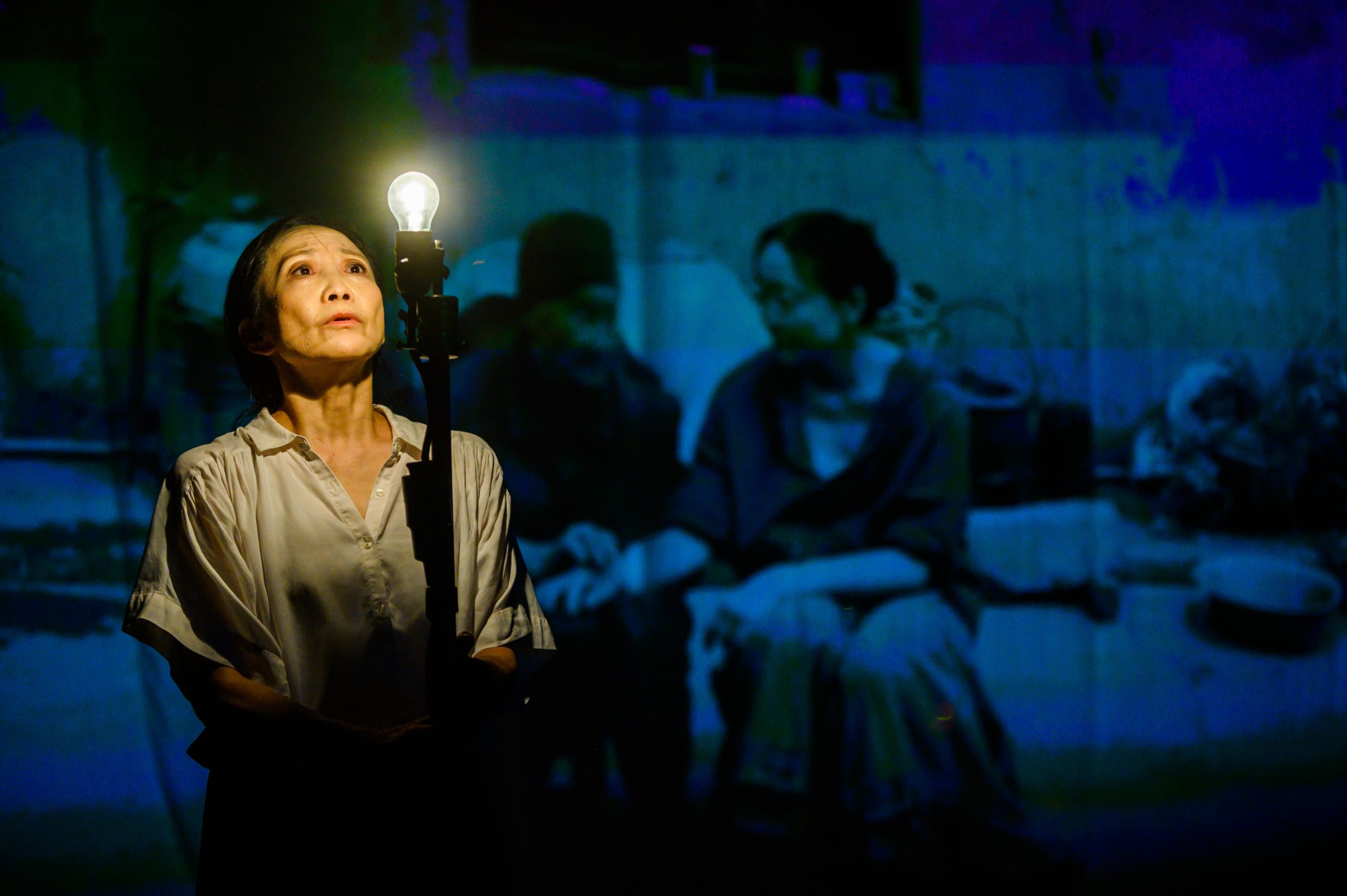