The wish to heal the war

He is the admonisher, the alerter. Worldwide renown and celebrated Israeli-British choreographer Hofesh Shechter is aware of the contractions and destructive sides of humankind. His new double bill “Double Murder“, consisting of the astonishingly contrasting parts “Clowns“ and “The Fix“, now becomes a warning sign that is no longer a prophecy but ugly reality.

On the occasion of the schrit_tmacher-Festival’s opening in Heerlen, festival director Rick Takvorian presented himself with mixed feelings. His “We’re back“ was supposed to express the joy of returning from a long Corona pause, a Yes to culture in odd and difficult times, as Takvorian put it. He therefore underlined in simple gestures the meaningfulness of being with each other opposed to being against each other. Half jokingly he described the festival program as a defiant “Anit-Brexit“ protest as there are so many British companies on the list. Culture hangs in there.

Yet, it is not at all that simple. Already a short glimpse into Shechter’s first part, his “Clowns“ that he had created back in 2016, resembles the news of our current situation in Europe: Threatening rumble roars from the background that are coming closer. These clowns on stage, they are no clowns. Shechter’s title reads like pure cynicism – at least nowadays. There had been costumes reminding of clowns in his work “Sun“ from 2013 for example, yet now the familiar fair atmosphere that still appears again and again superficially threatening and harmless, and that here seems in some way torn internally – which is nothing new yet seems more charged with meaning now.

These characters, they are no longer clowns. They are more like figures indulging in a helpless dance on the volcano in the midst of an unleashed storm of barbarity. A few last rituals suggesting the remains of civilization. For a very last time everything appears oh so neat once more. Then there is execution, assassination and murder like mad. And yet everything is so well lit. You shall not blink otherwise you might think Hofesh Shechter would not be doing anything, at least nothing evil. You know that light-footed prancing of Shechter, this fake innocence interrupted at any moment by the cruelty of humankind. Yet, there is no visible villain. This is no fight of “us vs. them“. We are everyone. The loud rattle of the soundtrack comes from inside of each and everyone. 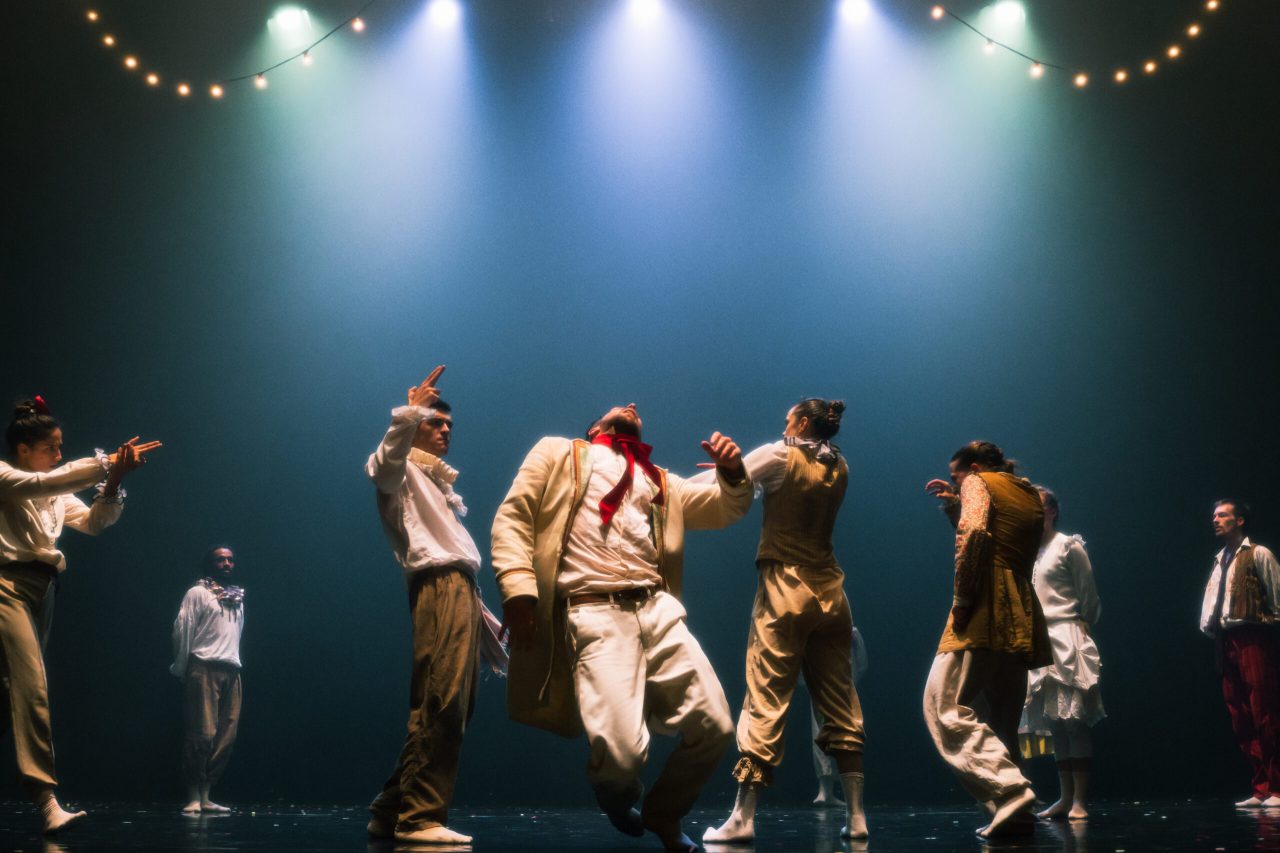 With Hofesh Shechter you always believe it is all about folkloristic traditions, as if tradition meant legitimation. You might as well take everything for legerdemain, as non-complex and harmless as the movement vocabulary appears for long periods: the well-known uplifted arms, the convincing and wrong joy. Again and again happily going round in circles. In these round dances death is always dancing along, with no one fighting against it. This is dancing in the face of death, or despite death. In particular impressive was what Shechter presented in 2018 with his “Corpse de Ballet“ when the dancers seemed to be more dead than alive. We cannot help it but dance against death. This is why it will never end. Not for Shechter, not for anyone.

And there is “The Fix“, a sort of positioning which is not at all typical for Shechter. And that is why it can be read as contrasting piece to “Clowns“, as contemplative stop of a small community whose members display from the beginning on an inward perspective with their hunched shoulders. And indeed it is possible to talk of a community concept here. The single one is seeking protection in the group, the reflectedness of the statement is being carried out by a complex movement vocabulary. Everything seems much more artificial without being artificial. This into each other and for one another is not at all artificial. While no one seems to have a choice in “Clowns“ regarding the outcome of the story, here the emotions become apparent in their purest form, those which make humans humane. Fear, despair, loss. An isolated scream but also the tender howling of a pack. None of this is directed outwards. The mouths wide open of the dancers are here a silently articulated symbol for vulnerability, a self-quote of Shechter.

This coming back is decreasing constantly until the dancers sit cross-legged and motionless on stage, gazing into the audience. This externally doing nothing instantly becomes a wordless dialogue with the audience. Free from kitsch everything is shifting towards a process of soft healing, accompanied by peacefully released guitar sounds. Above all childlike bliss. And in the end all is well. Considering the apocalyptic atmosphere of “Clowns“ this might be hard to believe. The company has all arguments on their side though, when they come off stage and into the audience to hug individual spectators. Long, very long. And there they are again, Takvorian’s words about being with each other. 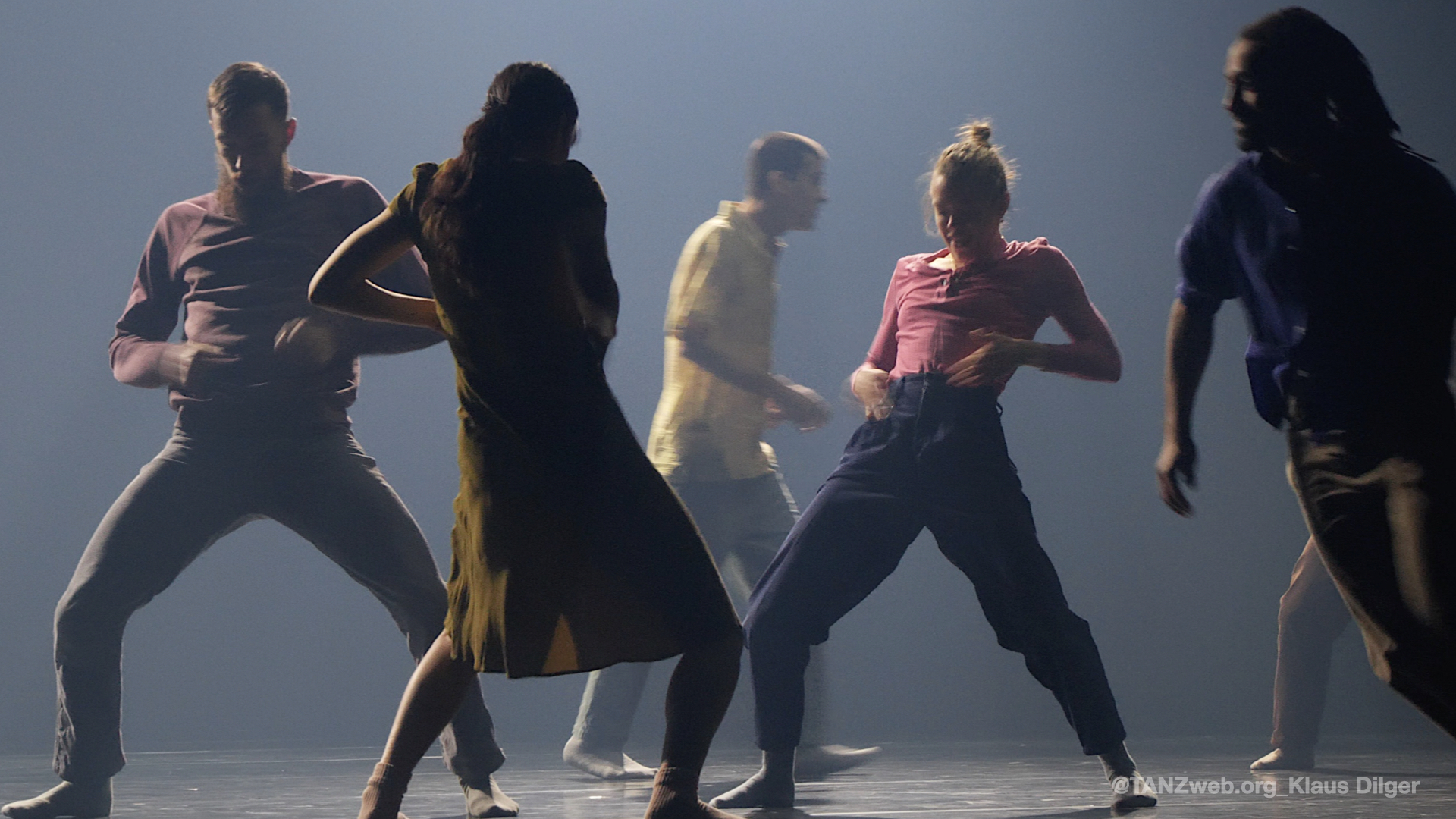