Joy and sorrow on green grass

One may see the pieces of Pina Bausch ever so often – yet even confirmed experts of her oeuvre are having a hard time grasping specific characteristics of single pieces within different creative periods. If one of them was a bit more melancholic as the other one was more humoristic? Are there really ‘especially beautiful’ pieces – or even failed ones? Or is it rather a question of timing and cast if a Bausch piece is able to create such power that it will be received as timelessly overwhelming artwork? The simplest and most common way to define of a work of Bausch is by its stage design. When for example the reenactment of “Arien” is announced you might ask slightly confused, “Is this the one with the cacti?” – No, it is “the one with the hippo”. There is “the piece with the wall” (“Palermo Palermo”). “The piece with the burrow” (“Viktor”). „The piece in front of the mountain face“ (“Rough Cut”). “The piece on grass” – that is “1980”.

In the glow of the surrounding spotlights it is shining in a juicy green. In the background: a small deer. It is going to be standing there for the whole evening and observe. It will witness how Nazareth Pandero lights a fire to sing a lonesome “Happy Birthday to Me”. It is nearby when Helena Pikon is dancing like a dreamy fairy through the drizzle of the sprinkler and when Ditta Miranda is measuring the lawn with her lips: “This piece of grass is 11 kisses wide”. It is there and it works as emotional amplifier: When the dancers lose it in a hysterical manner the presence of this shy creature emphasizes the dancers in their excitement that seems slightly too loud. However, in the course of this evening the dancers mostly cross the stage in a very gentle and soft way. “1980” – a ‘quiet piece’? 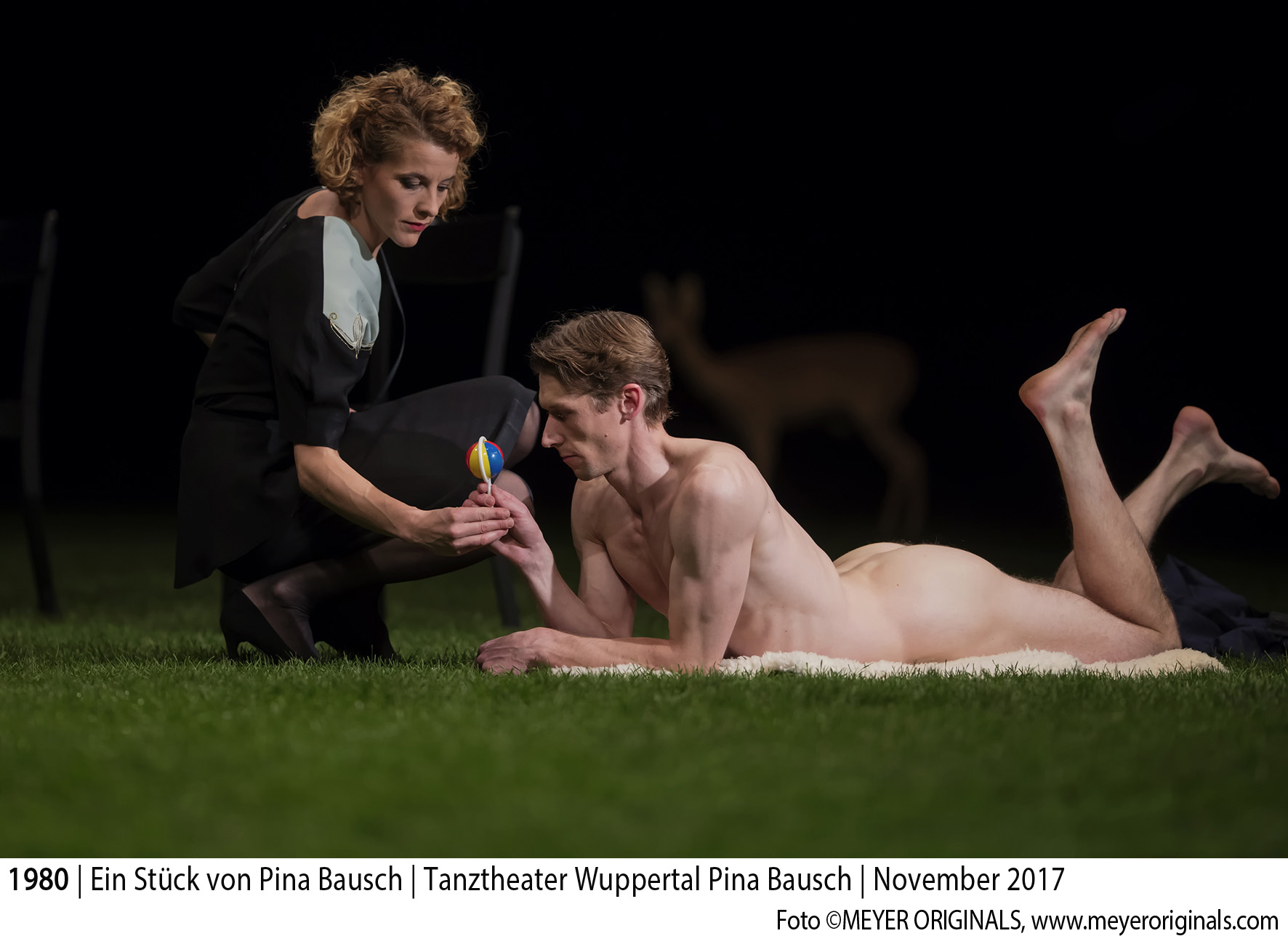 It premiered – of course – in May 1980. In January Pina Bausch’s life partner and set designer Rolf Borzik had died of leukemia. It is tempting to interpret the piece as a “work of mourning”, especially as one of the most beautiful scenes is a wondrous ritual of separation. Like a mute choir the whole ensemble is gathered in front of the Korean dancer Nayoung Kim. Each one steps forward and says words of farewell. Polite, touchy, affectionate, cold – a sequence of contradictory feelings, yet ultimately, this never ending ‘Adieu’ is nothing but a great brutality.

“1980” – that is the piece that is marking the starting point of the collaboration between stage designer Peter Pabst and costume designer Marion Cito that shaped the “look” of Pina Bausch’s Tanztheater with brilliant inspirations until her death. “1980” is the piece into which Pina Bausch smuggled three gentle elderly men and let them perform their tricks in casual nonchalance: a bar gymnast, a violinist and a magician who with his astonishing tricks always made broken things whole again – the healing power of illusion. And “1980” is the piece that is – alongside the funny-eccentric appearances of Julie Shanahan – especially influenced by two members of the company: Mechthild Großmann and Lutz Förster. Today their roles were taken over by the actress Silja Bächli and by the dancer Scott Jennings. The English dancer Jennings has been with the ensemble for five years now and thus might have received some great “coaching” from the master himself at the time when Lutz Förster was company director. In any case Jennings confidently appropriated those unforgettable scenes and is now declaring his love to a chair in a very British-laconic way. He shows that he is too big for the beds of the world and bosses his colleagues around in dashing German. However, how difficult it actually is to step out of the shadow of a star becomes very distinct in the performance of newcomer Silja Bächli. The Swiss-born does not have this smoky gutter voice that Großmann had and she is not quite the incarnation of the mocking and wicked full blooded woman (which nowadays as a female stereotype you cannot imagine anymore anyhow). It became apparent though that she can be a toll and rude hussy that holds the potential of an overbearing loudness within a non-prudish physicality. As the other dancers whisper her name in the nightly scene over and over again like a calling from the dead as in a horror movie the scene gains something suggestive. A whisper: be Silja, not the phantom of Großmann. 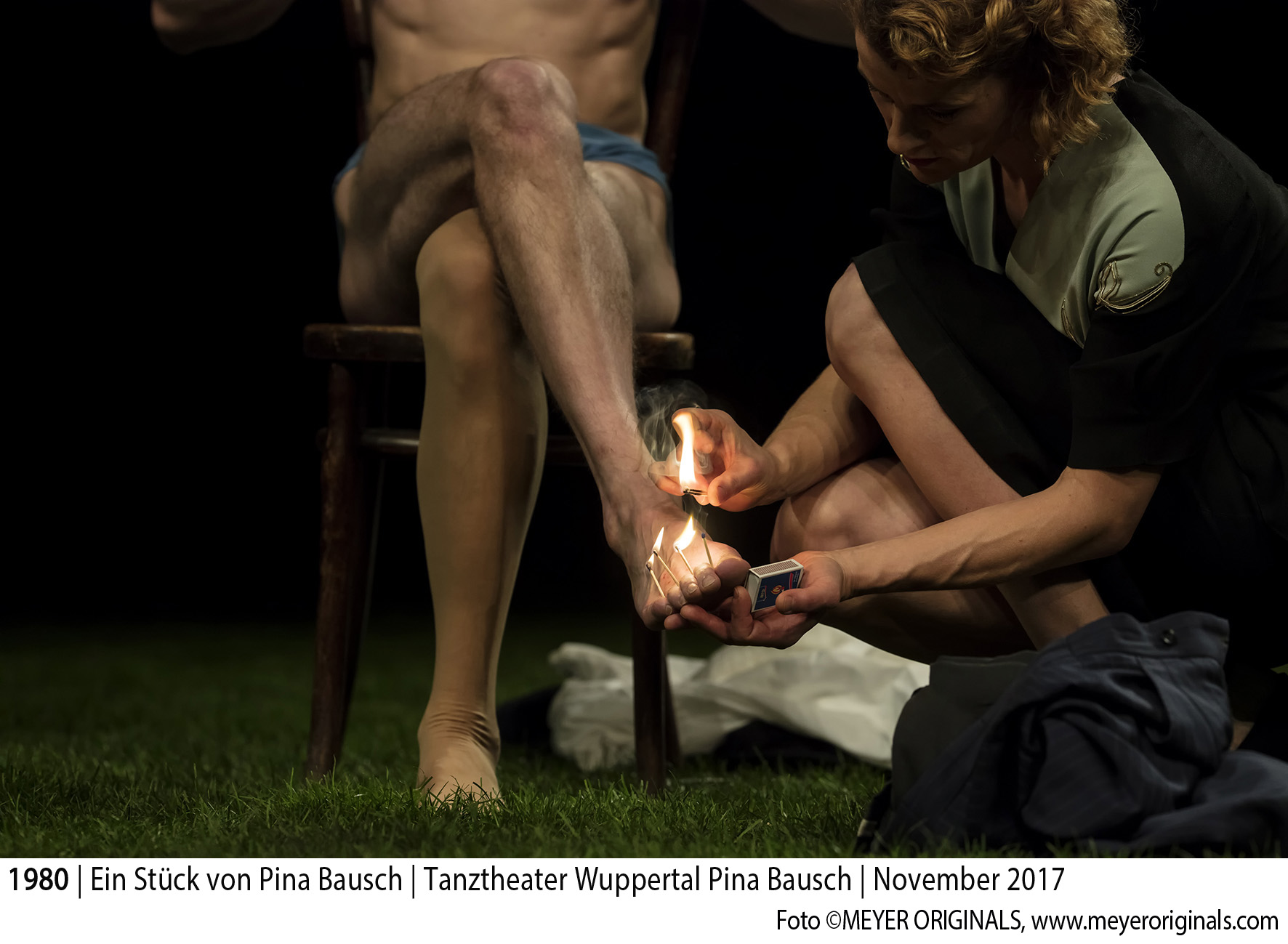 Numerous reenactments of Pina Bausch’s pieces have already shown that they can bear new casts and live further also without the ensemble that they were developed with. From the original cast of “1980” only the Spanish dancer Nazareth Panadero is left. Unforgettable the gentle sadism with which she pulls down the pants of a male colleague in motherly transgressiveness while kissing another so passionately that he looks as if he had the scabies with all those red wheals in his face from her red-colored lips.

All in all a feeling remained after the premiere that derives primarily from the second half. A feeling that this cryptic “1980” could contain more vulnerability and even more gentle pain than the multigenerational ensemble could depict. Yet, it is terrific to see them line up for a bizarre casting show behind a traditional TV, praising their legs as told, letting water be splashed on their faces, presenting their scars and call for attention with their particularities. And that in 1980 when there – at best – had been the Grand Prix Eurovision but no “Next Top Model”, no “Britain’s got Talent”, “American Idols” or other Trash-TV-Shows. We could have assumed with which humiliations people would soon voluntarily impair their self-respect. Pina Bausch had already shown it 37 years ago. 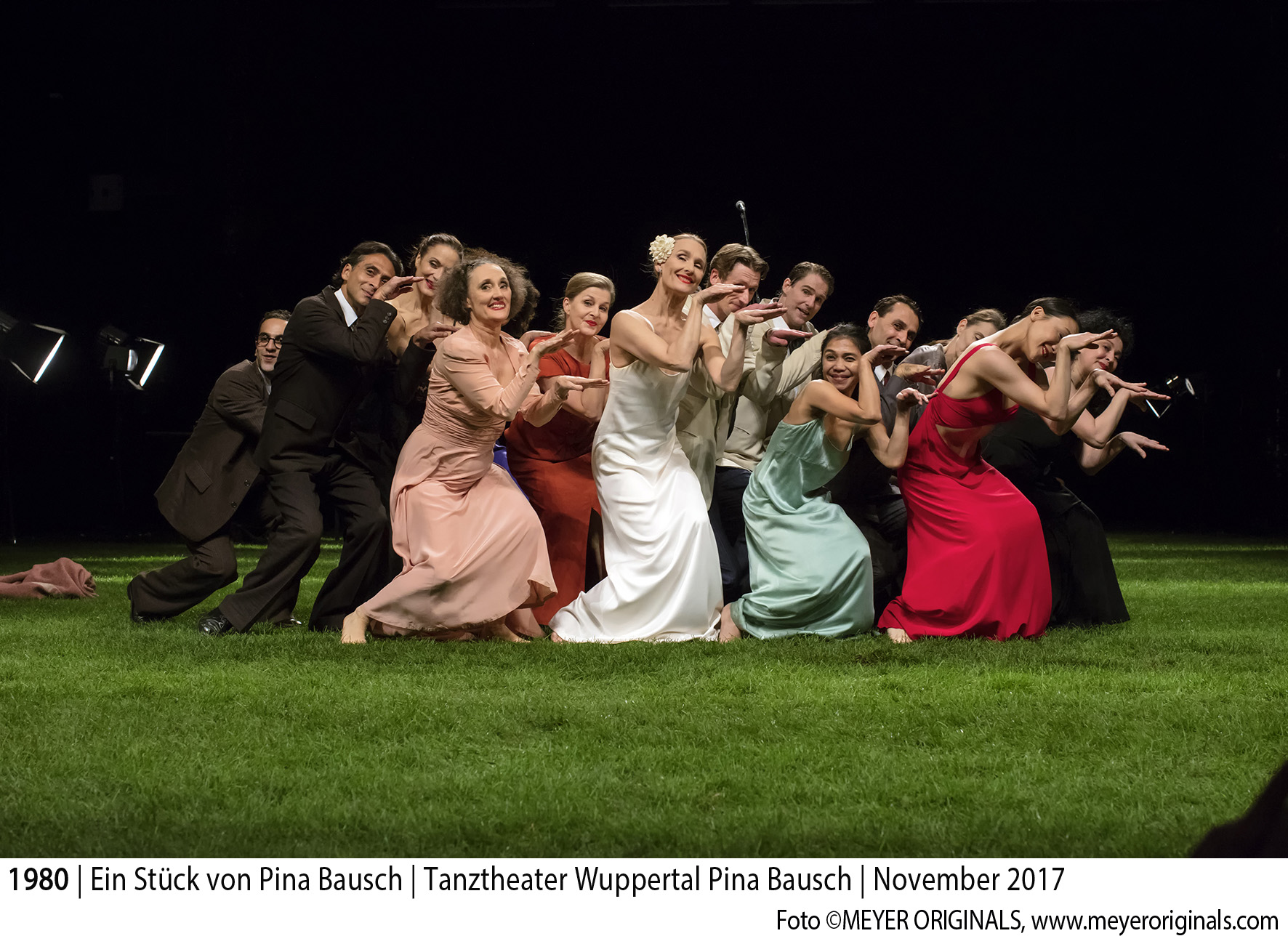