review: „Somewhere at the Beginning“ at schrit_tmacher

review: Somewhere at the Beginning

Her dancing body triggers the memory. She stands up straight, connected with heaven and earth and with stomping feet she arches her torso front and back. Letting bottom and head circle while waving the spine. Her hands are dancing in the air, they glide, pluck, palpate and shake off. The movements and the sequence are freeing body and soul. The present, a theater evening at Limburg Theater Heerlen, is let loose and a space of the past opens up. Thought by thought, image by image little particles of dust arrive which are being observed with a clear gaze, analyzed and related one to another. Obvious here the influence of the grandmother, a voodoo priest from West Africa, and the rituals of archaic cultures in the dance and technique of Germaine Acogny, the grande dame of contemporary African dance. These roots form the starting point of her dance; from there derives Acogny’s strength, emotion and energy in movement. Yet, Acogny’s accomplishments – that may not be underestimated for the African nor for the western dance world – lie in the transformation. Ritual and tradition are interwoven with the culture and values of a modern and growing West Africa, repeatedly shaken by crisis. 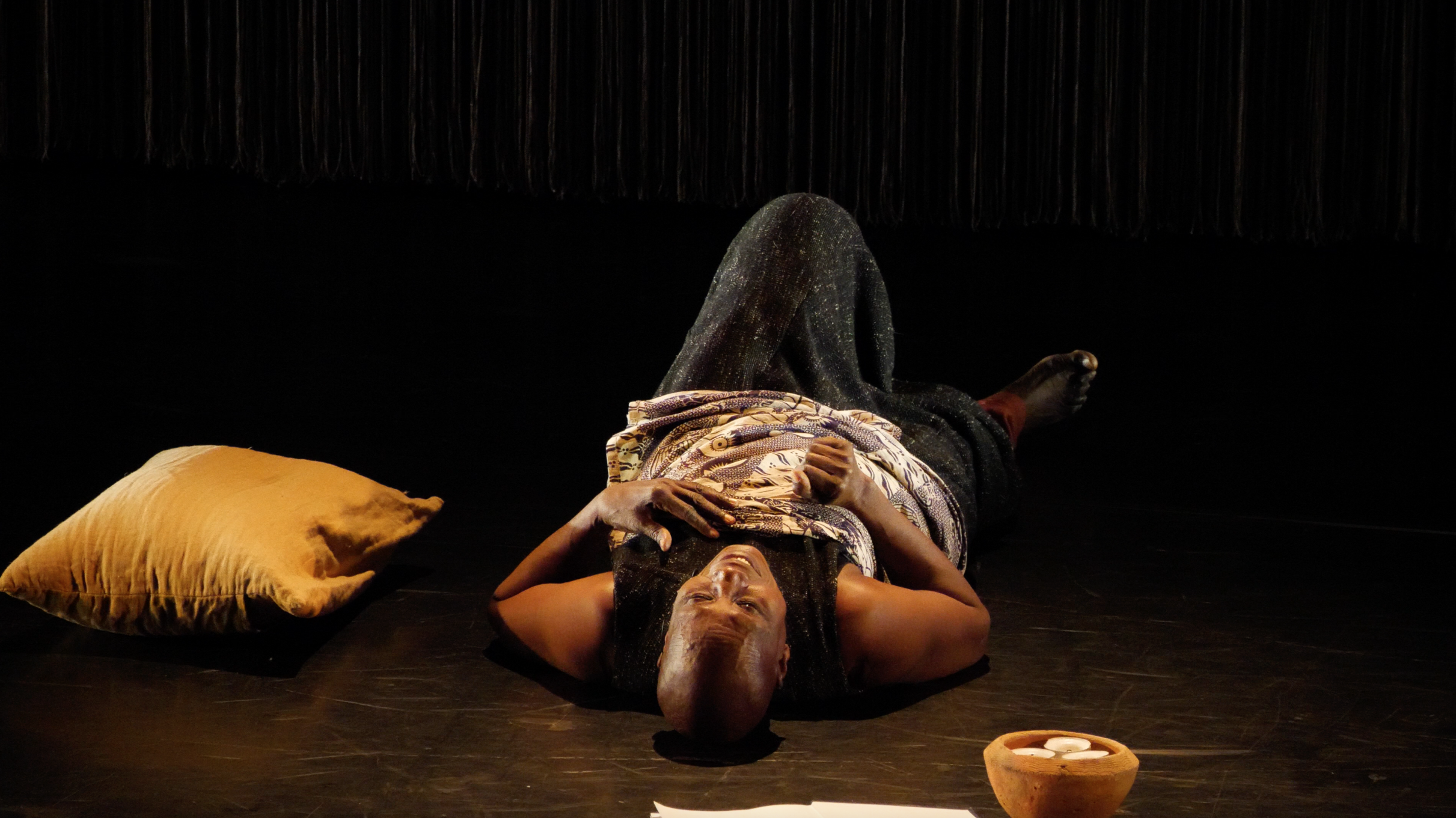 “Somewhere at the Beginning“ conjures her own family history by family recordings, tales, photos and past conversations. She speaks of the conflict between her and her father who served as manager for the French colonial rulers and converted to Christianity – rather following the urge to be closer to his masters than out of belief. But in order to be part of this world he thinks he must break with all traditions and beliefs of his mother. He turns away and further denies his roots. Germaine Acogny, the unexpected daughter, uses the dance to conduct a conversation with her father. She wants to know why. Why the break with family and tradition? Why the decision to convert without belief? And what do these decisions mean for her and her life? Does she have to follow her father in also breaking with him as she does not want to deny her grandmother and the mystic elements of the West African belief? Acogny does not find any answers. But she is not desperate. On the contrary, she and her French director Mikael Serre manage to create something really remarkable. The family history becomes the foil for the negotiation of West Africa’s conflict. A country, torn in between traditional belief and the modern age. A country that never processed – or was not allowed to – its colonial history. A country that suppresses its female citizens und beguiles its people into escaping the country. The video projections of the daily life in West Africa, projected onto a fine string curtain, merge with the family history of Acogny. 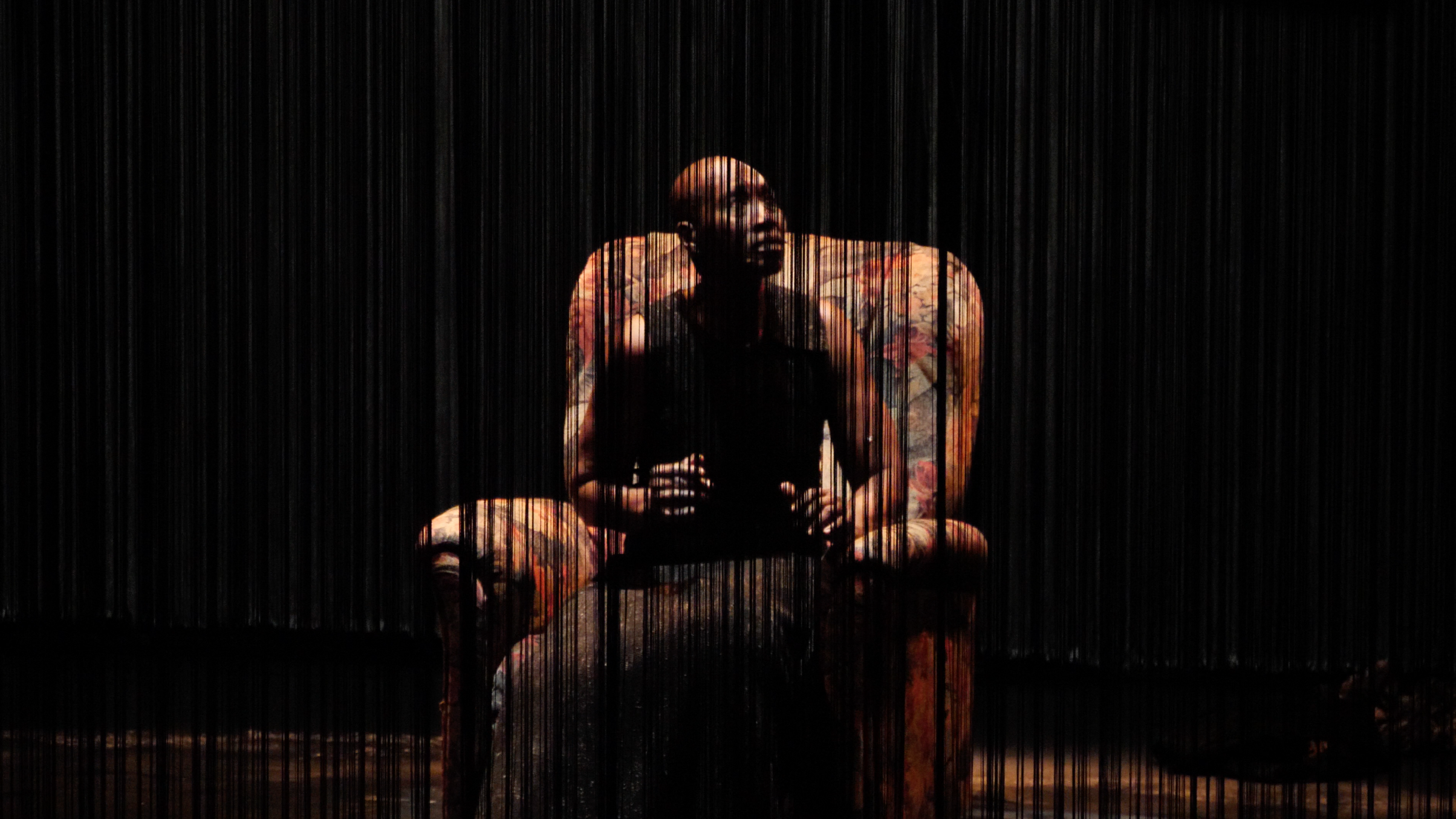 The impressions and relations – which the production provides via simple means – are impressive. The images designed for this continent, strange for most (white) people, that is full of prejudices are not crease-free but contradictory, torn, intense. The topics addressed span a wide range: Colonial past, voodoo belief, women’s rights, refugees in Europe,- all this finds its space in Acogny’s solo. Yet, the high amount of topics is a menace for fraying the dramaturgy. A reduction of the impressions, a clearer dramaturgical decision at times and a more coherent usage of music and sound would have intensified the impact of Acogny’s performance – as the dancing elements already express the struggle and conflict, the love and passion of a whole culture. The dance creates the connection in between tradition and modernity. It irritates, raises issues, pauses, sets forth. In her movements Acogny reflects upon the old and analyzes the roots. But she does not romanticize, she finds a strength there to generate something new from the old. Only this enables transformation, a change and a future. And only for the future Germaine Acogny is dancing her dance – not for the ghosts of the past.