A GALA evening event of modesty, deliberate moments and appropriateness

A GALA evening event of modesty, deliberate moments and appropriateness

Brief (nightly) observations and thoughts about this year’s virtual BAM-GALA that was broadcast last night from New York.

None of what we would expect from any award ceremony in the US appeared last night, even though Cate Blanchett was one of the honored persons of this year’s BAM (Brooklyn Academy of Music) GALA that had to be broadcast online for the first and hopefully the last time due to the COVID-19 pandemic.

Nothing would imply that these seats (in the spotlight) “normally“ would be worth in between 2,500 and 100,000 dollars which further contribute to financing the seasons of this unique cultural institution in New York.

This event illustrated – and this is becoming harder and harder every day to accept –  that New York does not represent what we receive from the US in general in pictures and phrases. It became almost physically palpable on how far distant we are in awareness from this city in terms of the consequences that this pandemic brought with it there.

Despite the occasion, how could you have appreciated the glamour and the exhibited wealth when the last images from New York, in light of presidential incompetencies, are those of a desperate major unable to be on the rebound regarding mass burials and rotting corpses in trucks, solely because the people in New York are dying faster of the virus than you could bury them?

We could experience – nowadays maybe even more – in and via the virtual GALA how this, often inexplicable and yet present, strength is emitted by true art and its funding institutions, the latter providing its space and shelter. 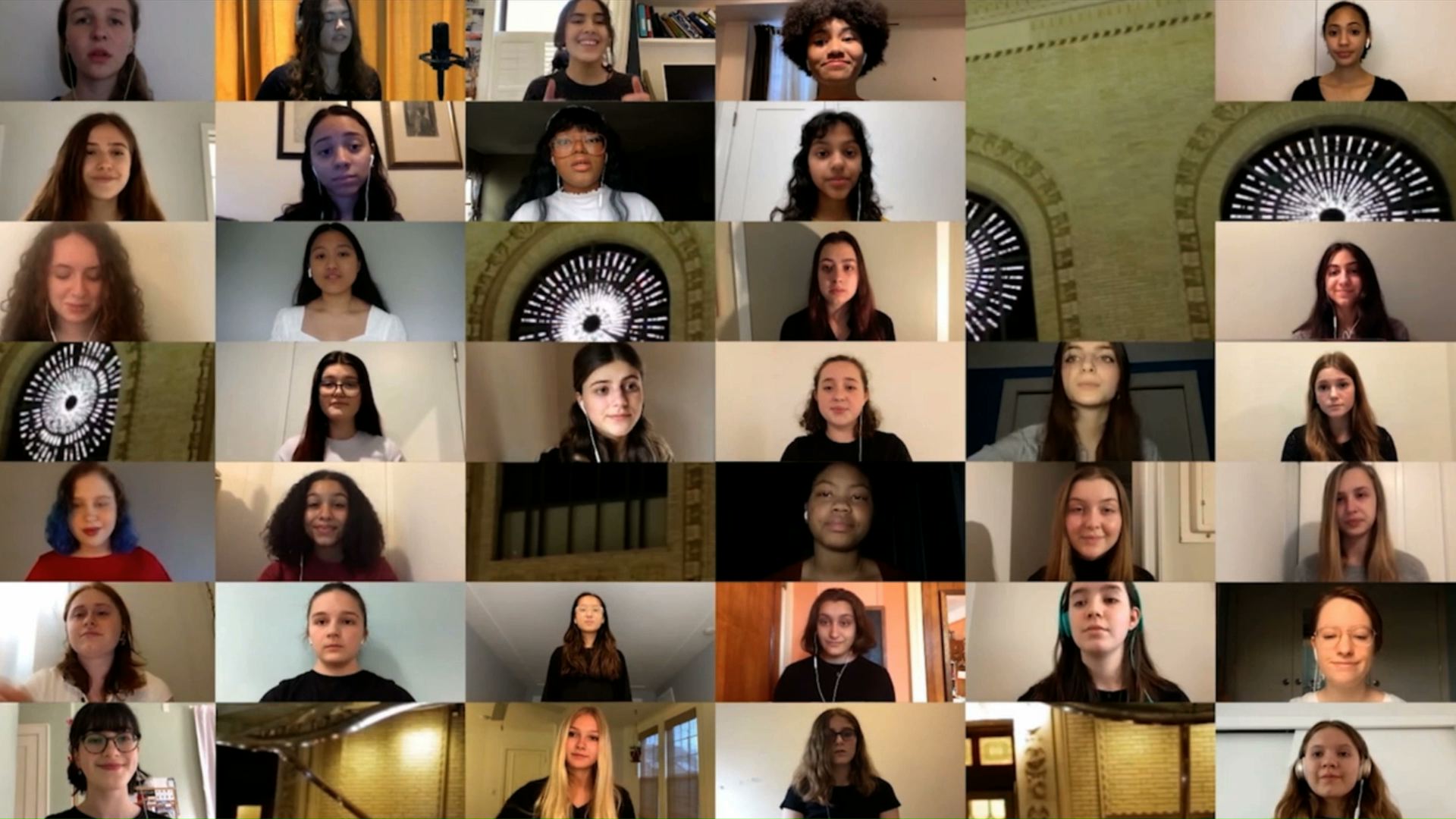 Youth had been represented by the Grammy awarded “Brooklyn Youth Chorus“, under the direction of the founder and artistic director Dianne Berkun Menaker, performing online a composition by Philip Glass with lyrics by David Byrne that was dedicated to Jeanne Donovan Fisher. In a choreography of images that was created by Joey Barglowski the forty young singers delighted with their skills and their presence and showed strongly to what extent it is possible to overcome the current physical distance via mental power and artistic talent and to what extent you are able to reunite on the level of art. And implicitly they made clear which social meaning the access to art but also to digital media of communication will have for the future of our world, across all boundaries of economic circumstances and differences.

There was Tanztheater Wuppertal Pina Bauch, represented by Julie Anne Stanzak who – with her incredible presence and precision in minimal means – created an access to the core of Pina Bausch’s work and enabled its perception in such unique way that could only be performed by a such excellent performer who personally had been working with the great German choreographer herself for decades and who had been filmed gently by the French filmmaker Nathalie Larquet. The artistic director of the Tanztheater, Bettina Wagner-Bergelt, chose this contribution in honor of Cate Blanchett. The contribution points out the incredible richness of the art of dance where you can experience and could even more in an inter-generational artistic collaboration and (re-)creation of a work that involves and involved finding a language for life via dance as if it was only in such a way to overcome “Babel“.

In honor of the author Zadie Smith the member of the Alvin Ailey American Dance Theatre Company, Hope Boykin, dances in the street of New York in a short performance film by James Gilmer. The film was inspired and sublayered by an article of Zadie Smith that she wrote once for the New York Times: “How Alvin Ailey Opened the Eyes of a 12 Year-Old Zadie Smith”. A tribute to New York but even more to Alvin Ailey and all black dancers and artists with him. And also here, voluntarily or involuntarily, it became apparent and, not least because of the victims of the Corona crisis recognizable in the USA, how much race and origin do still decide on health and physical integrity in this country.

It had been a GALA-evening of modesty, deliberate moments and appropriateness despite the solemn occasion – and that was soothing. Each and everyone, in the statements of the honored: the actress and director Cate Blanchett, the writer Zadie Smith and philantropist and producer Jeanne Donovan Fisher who were honored for their contributions in film, literature, theater and cultural philanthropy, as well as the hosts: BAM president Katy Clark, the artistic director of the virtual Gala of the BAM, theater and film director Maureen Towey, BAM vice president and former dancer Coco Killingswort as well as the artistic director of the BAM, David binder, were steeped in this spirit of clarity and appropriateness. 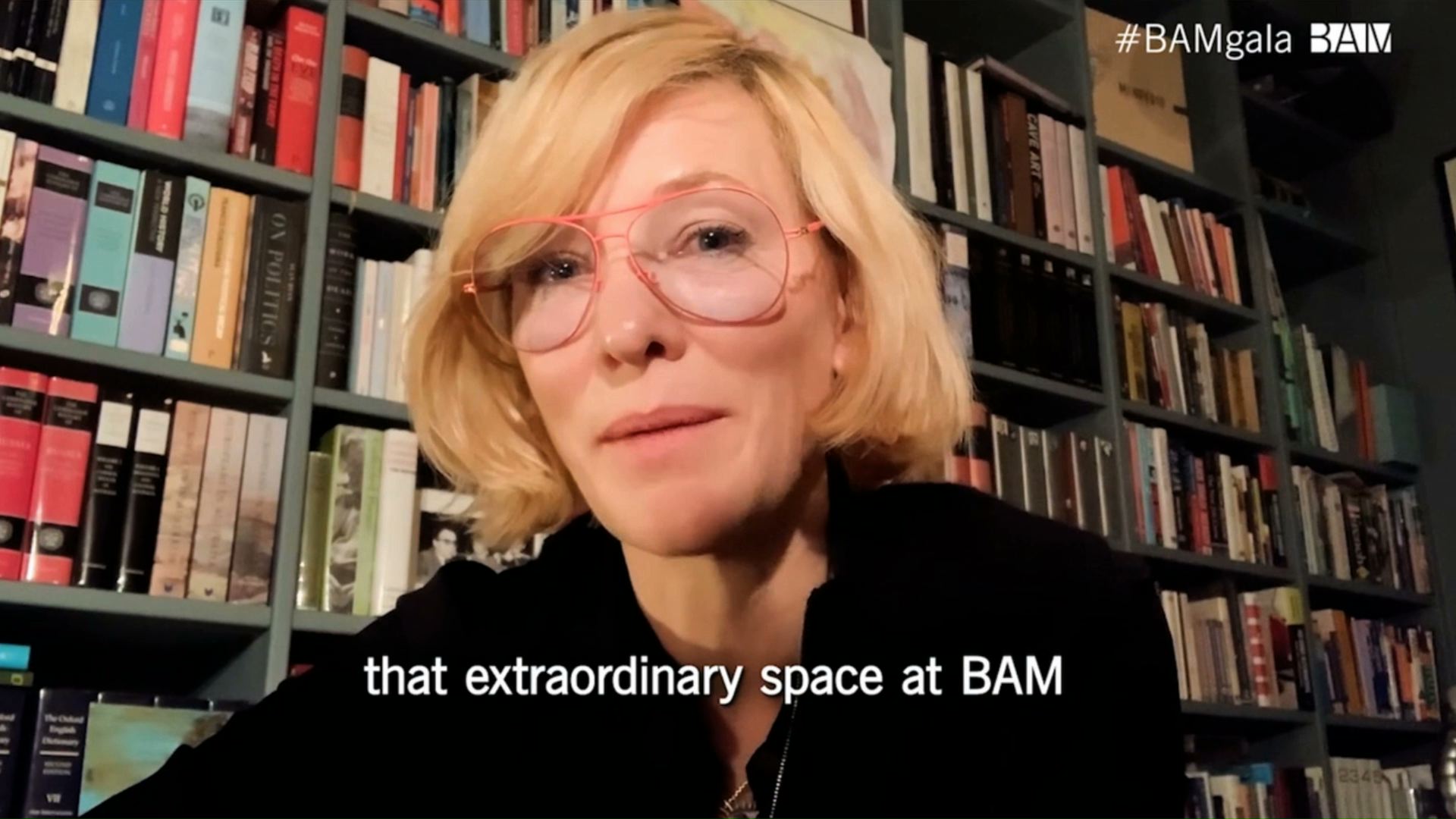