At the beginning of the research work, which could now be seen as „North Korea Dance“ at the Parkstad Limburg Theater, the working title „DMZ Project“ was already set. The title is referring to the demilitarized zone, that border strip between North and South Korea, which had been established since 1953 after the three-year Korean War and was supposed to represent something like a neutral territory although there had been incidents again and again.

Eun-Me Ahn is considered as one of the most important choreographic artists in her country, and often also stands for the extravagant costumes and stage designs of her pieces, corresponding to her own appearance. The enfant terrible of the South Korean dance scene has also enjoyed meaningful success in Europe and since 2001 has been a frequent guest at the festivals of Pina Bausch, to whom she was befriend. She is currently a member of the selection committee for the „Pina Bausch Fellowship“.

The audience could therefore look forward to Eun-Me Ahn’s view of common cultural roots and their developments in a divided country, a view that would and could be anything but neutral. The topic of „North Korea Dance“ alone was likely to have caused more than just unease among the political leaders of her country.

The artist researched the choreographic material, according to her own statements, exclusively on the Internet, from video sequences of military parades, folk dances and propaganda performances, which were presumably posted on the Internet by tourists. Material that she has edited and alienated, as well as the costumes and uniforms you see now on stage. 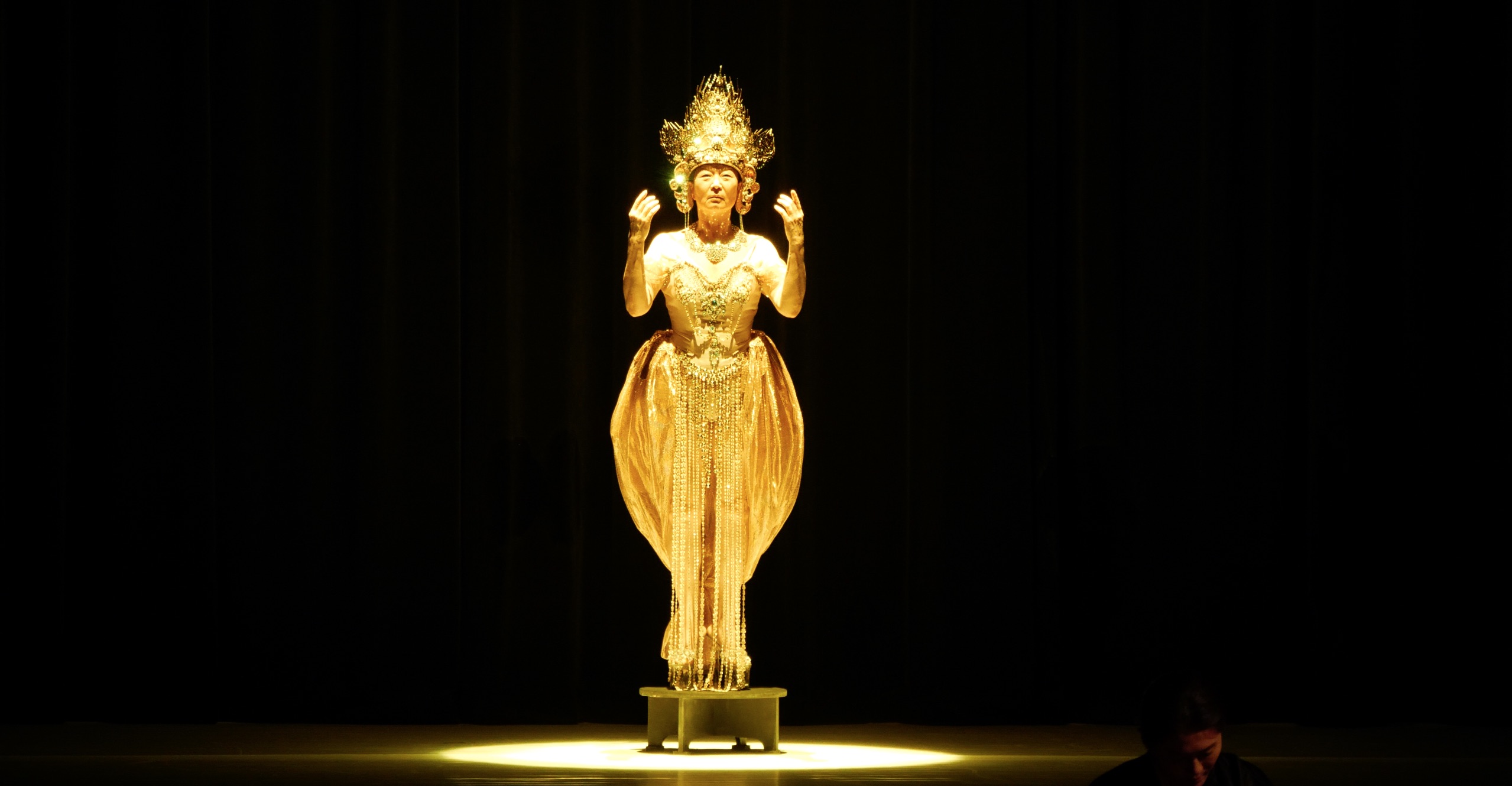 Much of this material probably originally served the sole purpose of celebrating the ruling regime and its rulers, of whom at least Kim Jong-un is likely to be visually present with his shrill and eccentric appearances.

The audience in Heerlen got an impression of this, seeing many of these videos at the entrance before the evening dived deep into Korean culture beginning with a kayagum performance, a traditional instrument from the sixth century, followed by a solo of the choreographer, in which she interpreted a dance of Seung-Hee Choi, all dipped in gold. Choi was her great role model and one of the first to transform Korean folklore into a contemporary form. She had decided to live in the socialist North after the division of Korea and her further artistic path remained unknown in South Korea.

Unlike her search for traces of Korea’s dance roots, as in „Dancing Grandmothers,“ when she invited contemporary witnesses in the provinces of South Korea to film their dances and even put them on stage later, this path of inviting contemporary witnesses from northern Korea was blocked. Here dancing grandmothers who look at themselves with a lot of humor and a twinkle in their eye, and there?

At no point does Ahn make fun of the „North Korea Dance“ but the way she lets the dancers parade across the stage in their gilded uniforms, instead of being grounded militarily with a small shift in accent, she has them open up the colorful round of folklore, acrobatics and fan dances mostly jumping and floating and reminding us of cheerleaders, which brings us back at times to those grandmothers who replaced military order with age-old individuality.

Even if the evening appears to be largely structured like a revue, with sometimes glaring and sometimes kitschy costumes and a show-like lighting design, the choreographer succeeds again and again in creating moments that suggest that she also seems to be quite seriously concerned with the subjects of encounter, exchange and reunion.

„All of us together“ appears as a translation under the Korean lettering after the dancers have met at a virtual border of light in complete silence, approaching each other and holding hands. They begin dancing together, they clap their hands, want to celebrate, together. But here it becomes apparent they are too few for this, the spark does not want to flash the audience.

Then it starts again, the artificially generated, beat-accented computer music whose sounds are reminiscent of pinball machines but far less exciting. Then back to the faces, the grimace-like smile that does not move any millimeter from there. It’s showtime folks, until the hard break of the sudden shutdown of light and sound.

Only after the prolonged applause it becomes clear what a performance the artists have delivered on stage: Four out of ten dancers had tested positive for Corona shortly before, and so „North Korea Dance“ had to be fundamentally rearranged for this performance to take place at all. You can only take a bow there.