Marina Cherry and Cie Un Loup pour l’Homme: schrit_tmacher-Festival takes a look at the edges of dance and Cirque Nouveau at Eupener Schlachthof

Some kind of changeling here, the idea of horse and horseman there. The artistic openness of the program of schrit_tmacher-Festival makes it possible to discover the conceptual edges of dance and to experience two works in Eupen that in fact neither one of them turned out to be everyone’s taste. For both Marina Cherry’s Solo “Only Bones v.1.6“ as well as for the exhilarating duo “Cuir“ of the French company Un Loup pour l’Homme, there had been open enthusiasm of the audience right next to defensive reactions of single spectators who respectively did not stay till the end of the performance. Not every reaction is comprehensible. 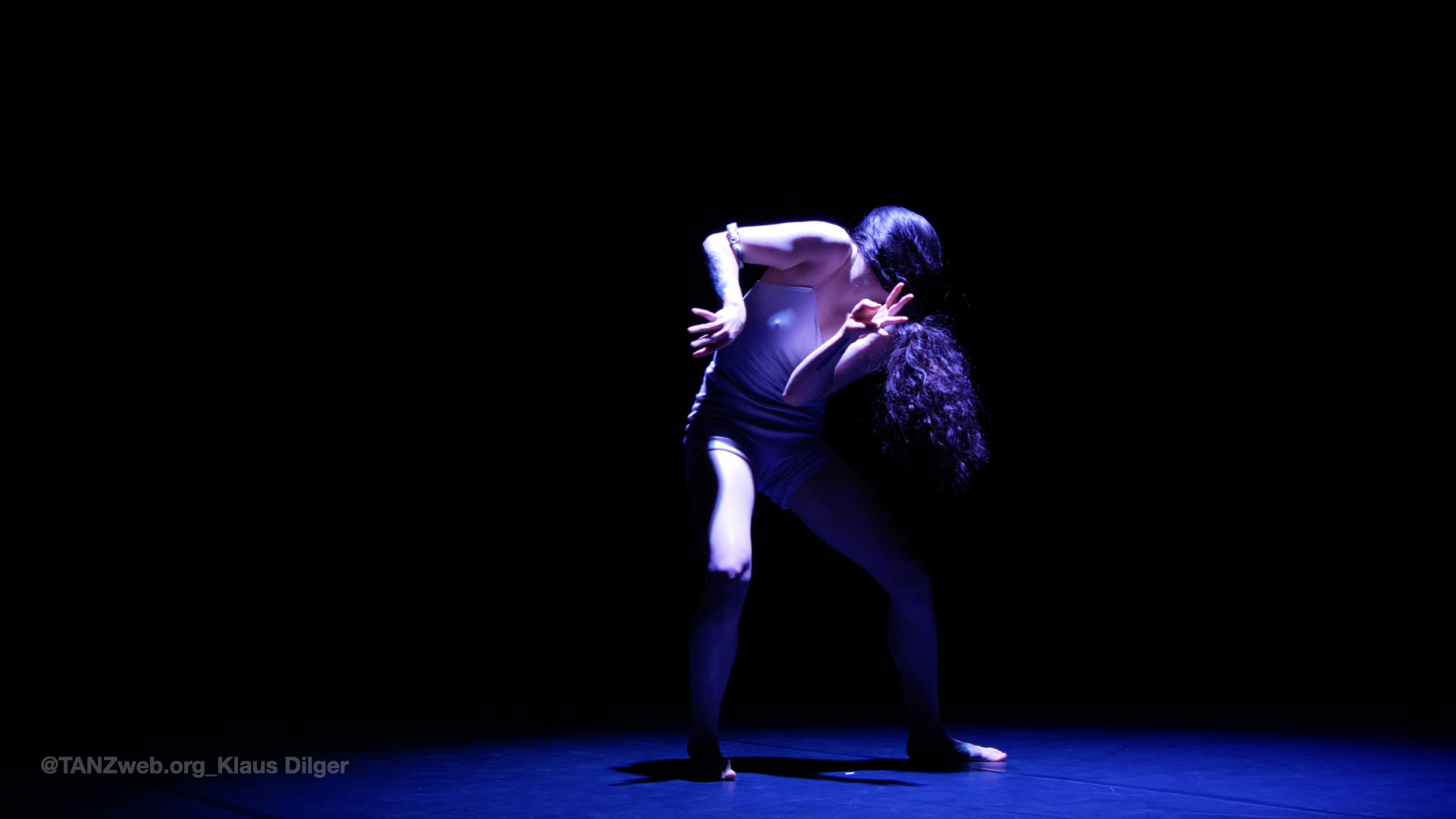 However, without background knowledge even Marina Cherry could be misunderstood. The contortionist from the USA has a circus-based education and follows clear guidelines with her work. The “Only Bones Project“, originally an idea of New Zealand artist Thomes “Thom“ Monckton, follows clear criteria for this kind of performance. Under the premise of Physical Theater the idea aims at significant minimalism. Only one spotlight is allowed, no narrative, no stage, no props, no text and everything has to take place within a limited space.

The result of these specifications turn the performer into a being only vaguely reminiscent of a human being. She becomes only joints and limbs, an alienated grotesque that leaves unclear if it is the front or the back of the body. The sloppy sounds from the speakers provide as little a reliable basis for a classification as anything known. And Marina Cherry takes her time. The audience is supposed to get used to the inexplicable. But how shall that be possible? This acting on the spot immediately raises the question of where the work could develop towards and if sufficient variations are possible to carry through 45 minutes. The deliberate absence of any dramaturgy does not make it easy. And exactly at that moment when you might fear that nothing more could be added, the lighting mood, the sound, the initiation of movement changes completely. Marina Cherry is not only a strange creature, she is many. She is a grotesque mouth with neither eyes nor nose. She is a cinematic-epic allegory of the wounded believers. As if her body did not belong to her, everything is shifting into unexpected directions. A liberating shout is scraping along the edges of hysteria. She makes her arms rotate in such a peculiar way as if this helicopter might take off at any moment. She succeeds in making it impossible to keep track of the arrangement of her legs and thus makes the audience believe she had four hands. The witch Marina Cherry does what she wants. She seduces, confuses and amazes, surreal distorted facial expressions included – leaving the audience without any ground under their feet. 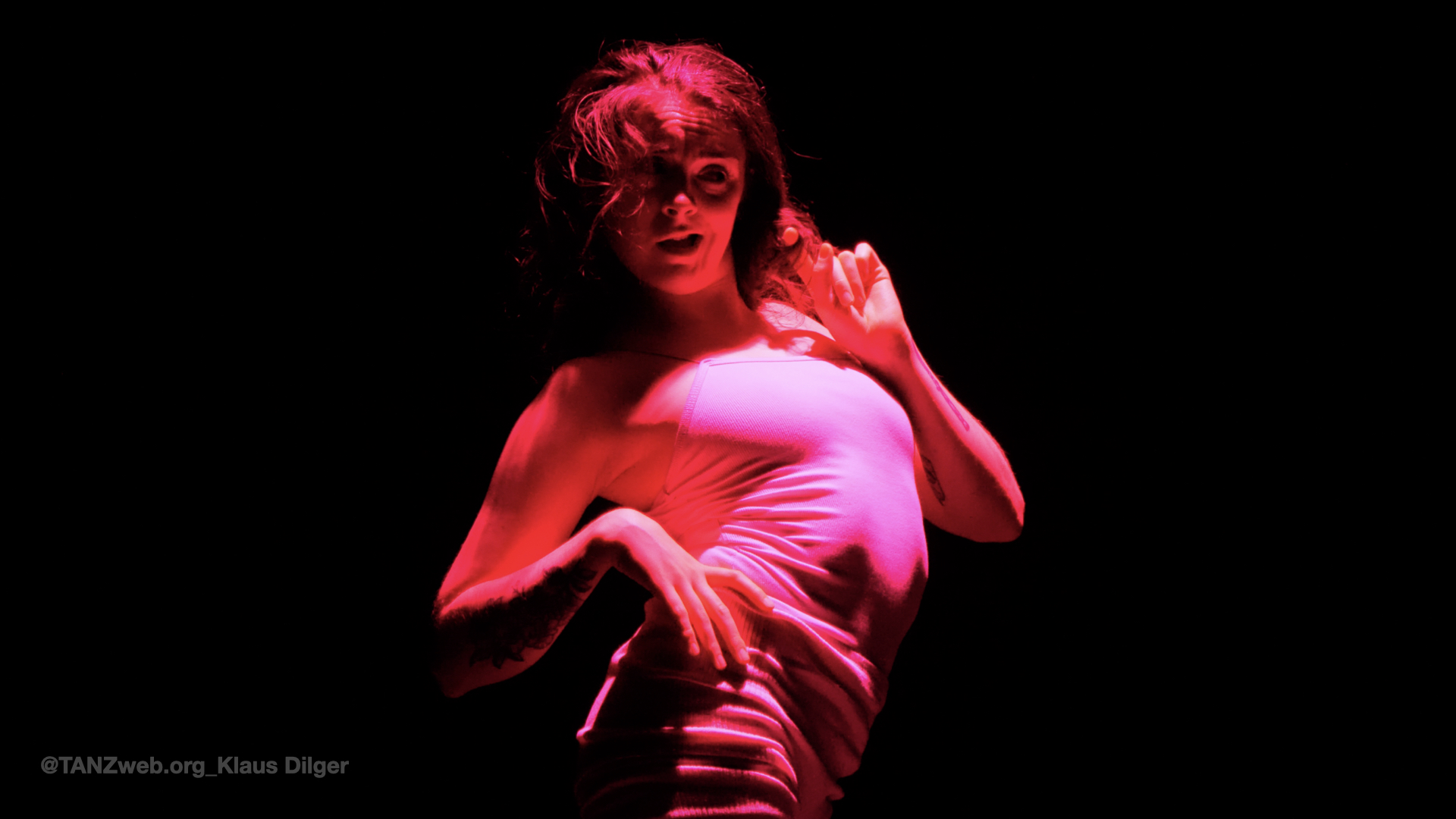 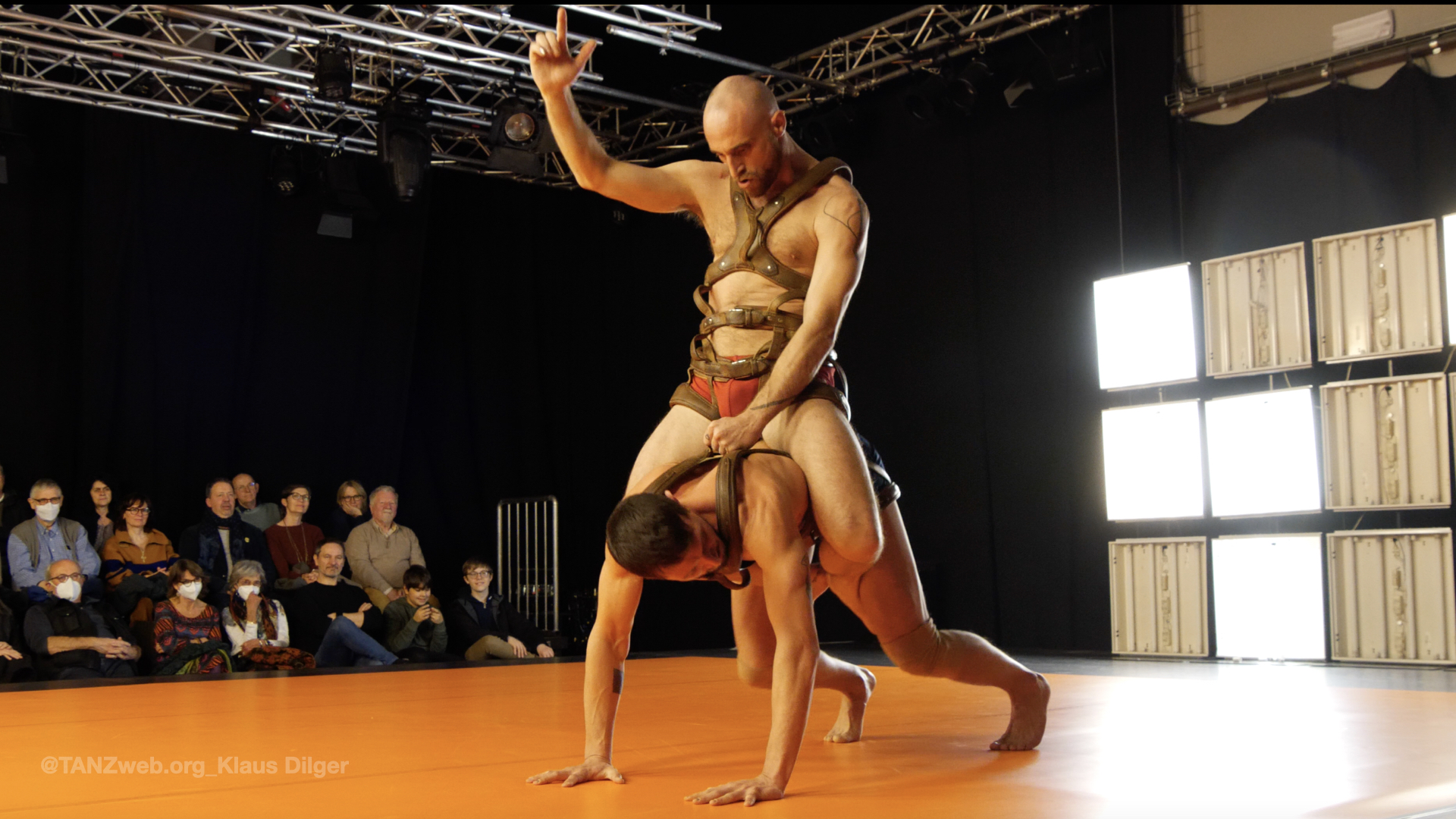 The two performers Arno Ferrera and Gilles Polet of the Cie Un Loup pour L’homme counter this evasion by the means of alienation with clear, masculine physicality. Ferrera, who also took over the artistic direction for „Cuir“, comes from the field of Physical Theater. Together with Gilles Polet, who has already performed as a dancer for Jan Fabre in „Mount Olympus“, he raises the question of power and its exercise as well as its abuse within the relationship of these two men. Both are dressed in leather harnesses, which, according to their origins, are designed for draft horses. Here, they do not only emphasize the essential masculine principle of strength. Equipped with several handles, they enable artful togetherness, on top of each other and next to each other, in which again and again the individual appears to be reduced to his physicality. Ferrera appears as the horse carrying the horseman Polet on his shoulders. The power imbalance between the giver and receiver of orders is unmistakably counterbalanced but quickly reveals itself to be a functional structure that shows a game in which the exchange of roles is possible. In this way, the use of power does not tip over into abuse. This becomes visible again and again through acrobatic approaches of equilibrium. Here, one carries the other’s load. The play with dressage and commands is a testing of possibilities. The body becomes an instrument of communication in a double sense. One needs the other, without dependence arising. This togetherness is a wanting, not a need. Aggressiveness is also freed from threatening traits. 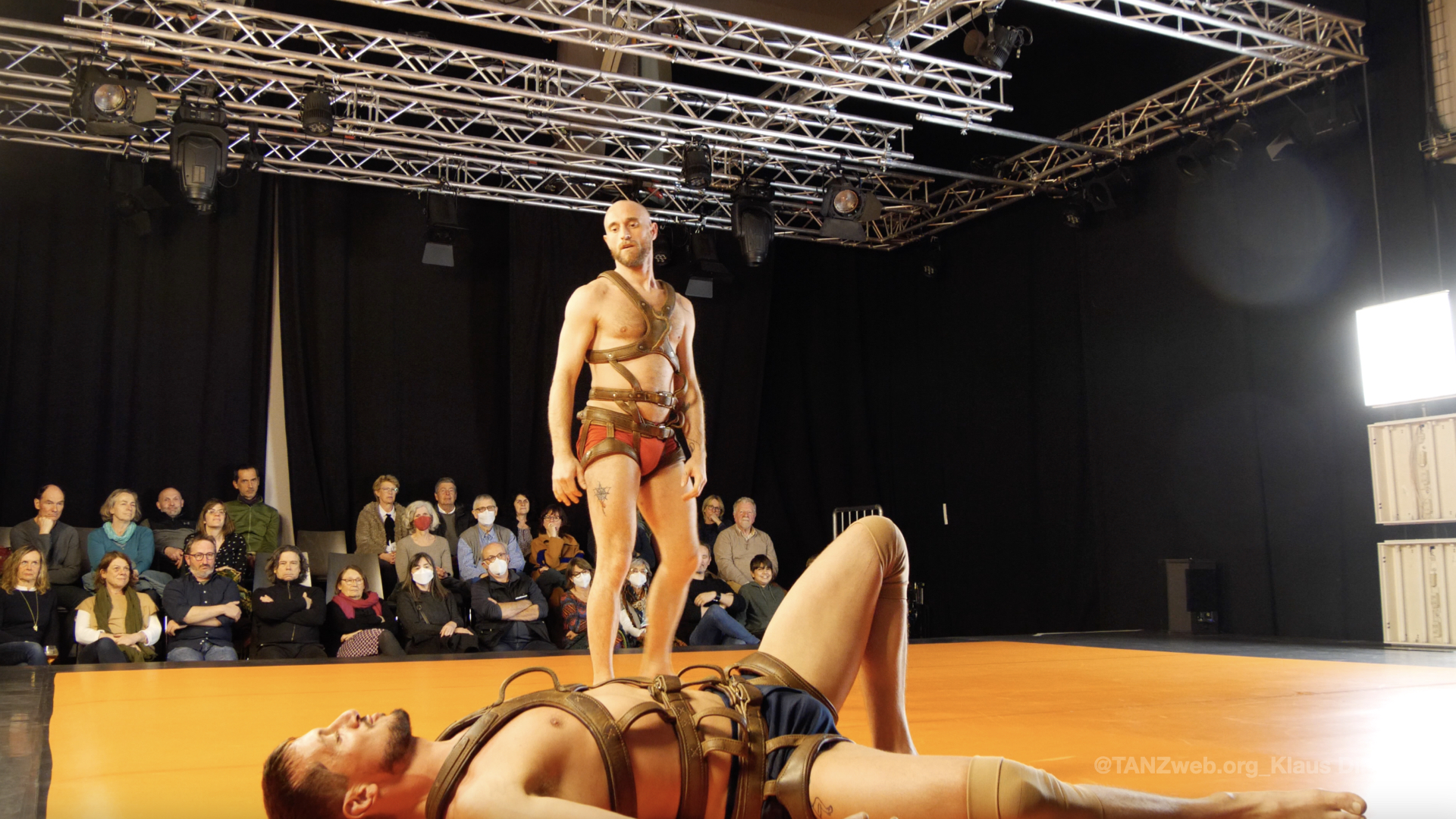 When the feat of strength remains a mere ritual for a while however, the message is also getting stuck in the moment. A dramaturgical density could have further emphasized the flip side of this play with power. The breaking up of the distribution of roles and power naturally allows tender moments of closeness which charge the touch with sensuality, where otherwise the functional aspect of togetherness is in the foreground for long stretches. No strength without weakness. 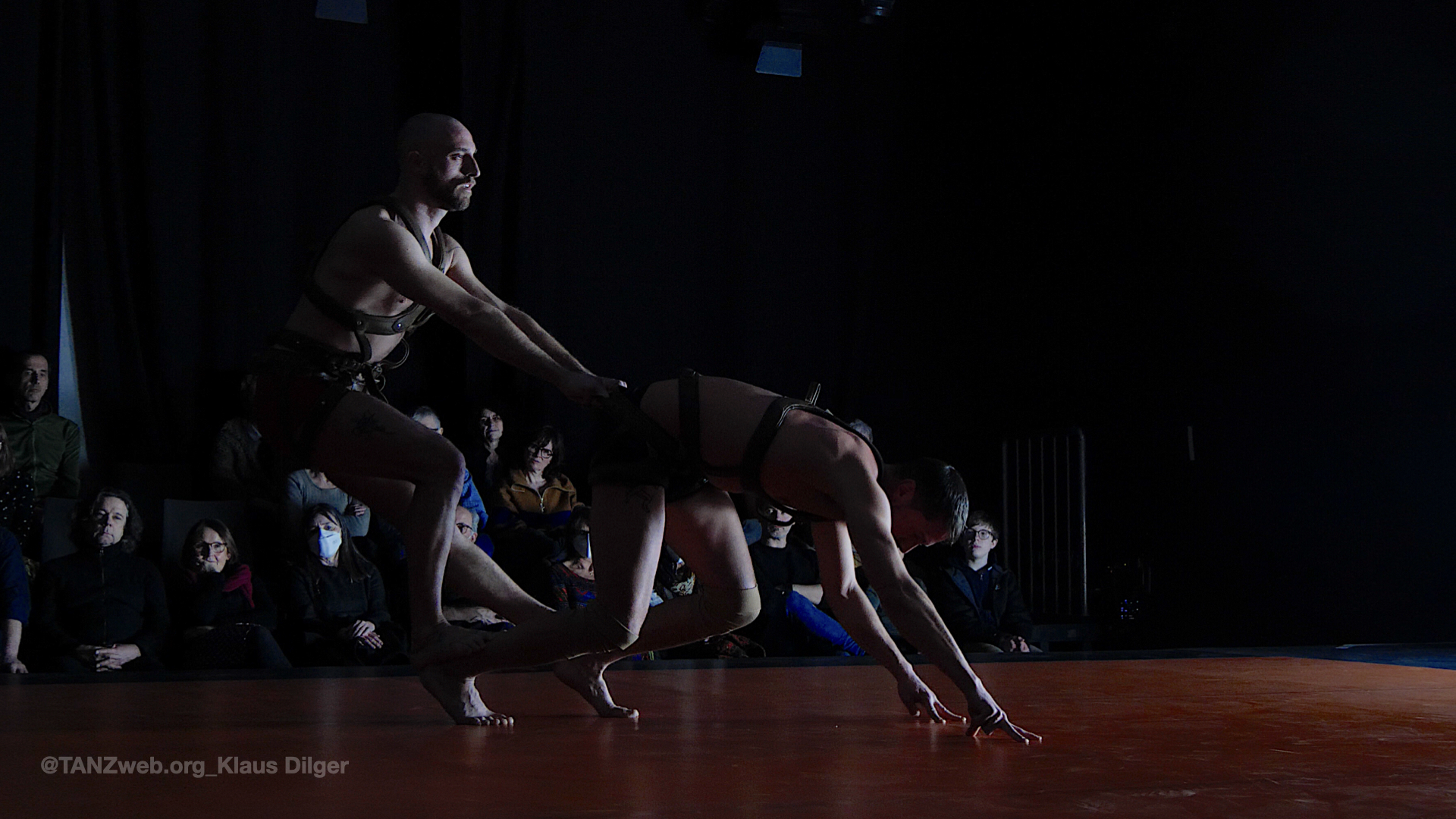