Greek choreographer and expert in vegan dramatics, Christos Papadopoulos, will be a guest at tanzhaus NRW on November 8 and 9.

What a disaster. When a huge ice sheet broke off in Antarctica in July 2017, one-eighth of the Larsen C ice shelf, it did create not only one of the largest icebergs observed to date. The breakage also indicated a beacon of climate change, even though massive amounts of the ice masses of the Antarctica had drifted into the open sea long before: Larsen A disappeared in 1995, Larsen B disappeared in 2002. The media hype appeared even more dramatic for Larsen C. Although the ozone hole caused by hairspray had previously been considered a particularly exciting cause, the breakage of Larsen C five years ago was the iceberg-turned-manifestation of climate change par excellence.

Anyone with this knowledge or just the image in mind who now sees a piece called „Larsen C“, a choreography by Christos Papadopoulos produced in Greece, cannot help but first be struck by the incredible power of what good theater marketing can do today: it is the choice of excitement for a title, followed by nothing, absolutely nothing in terms of content. „Hamlet“ without Hamlet or „King Lear“ without Lear is just as modern as in „Waiting for Godot“ without Godot has always been a given. The next higher intensification is the name of a catastrophe without anything to following up. This is how realistic you have to see it. 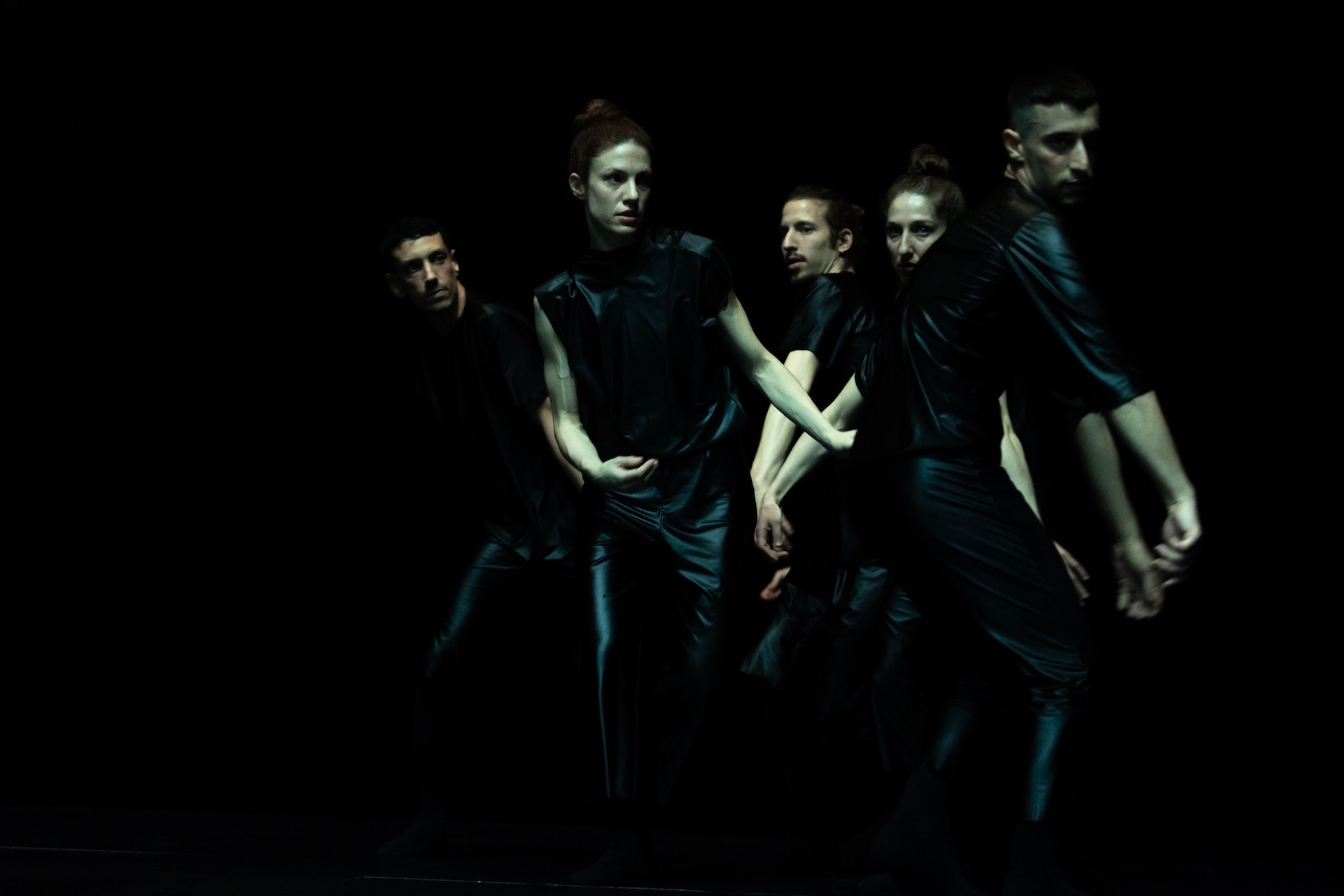 We do not see anything at the beginning, we do not hear anything either – a perfectly profound introduction, which only the dance world reserves for itself in this way. Nothing shall be expected when a naked back appears in thin spotlight, soon a back in a suit, then a leather back. And finally a soloist steps into the light that only illuminates his arms.  Giorgos Poulios, the composer, lets water flow acoustically. You might think: melting ice shelves. You might think, at the Onassis Stegi, the producing theater in Athens, which provides its audience with a tetrapak of water at every sold-out seat: It should offer rather a cup with a melting ice cube.

But now the legs of the soloist actually begin to move, disappearing in the light of designer Eliza Alexandropoulou. The dancer seems to slide on the dance floor, does not lift his invisible feet, gliding as if on ice. In addition, there are a few disturbing sounds that shoot through his body, tossing his head around, piercing his chest, hindering his step. We are very close to him now. You imagine yourself in the melting Antarctica at night, and again we see a back, and four more backs gathering in pairs, and again Giorgos Poulios sends these strange sounds into his melting chuckle. But now that the three couples have found each other and are literally engaged in a crab walk with themselves, not a single jolt goes through their bodies anymore.

It is about here that choreographer Christos Papadopoulos says goodbye to his title, to his idea, to his piece, which was created in March 2022 and has a world-record number of co-producers, so that in a very short time it was capable to create a breathtaking tour from France to Rome, Madrid and Brussels, and which will now also be presented in Düsseldorf. 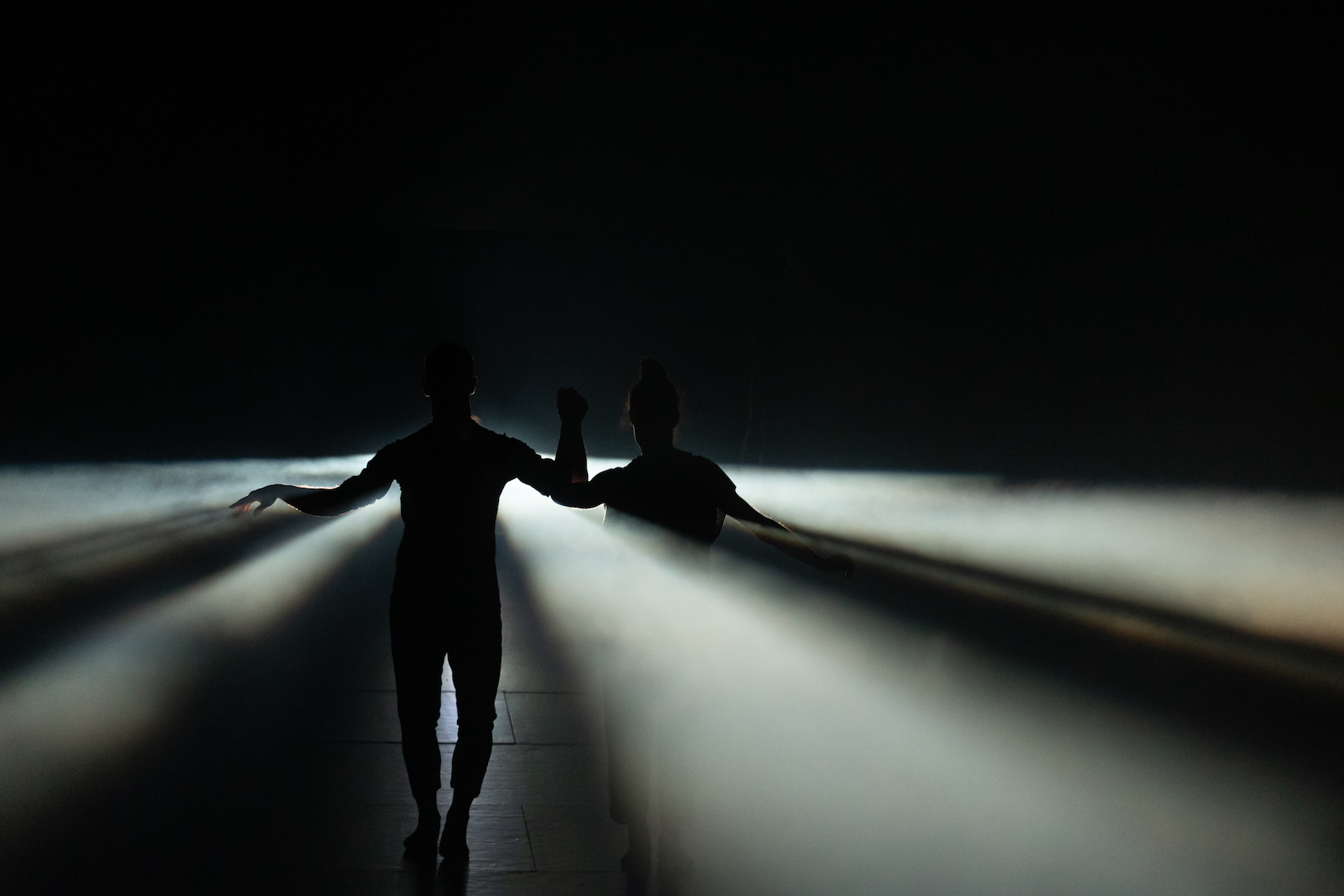 A cloud of fog rises towards the audience and a dancing couple in the backlight casts a gigantic shadow over the audience. Only the hands emerge through the cloud, like individual parts, as if no longer connected to the body. Here the soul is awakened again when you see such bodies blinking against the light, literally sticking their no longer visible heads into the sky. Only the torso is still standing, while the eyes of the dancers seem to look beyond the horizon. There is power in this finale. It culminates in a dance of the fog that casts black shadows in the light, streaks that seem like the ink of an octopus and for a moment reminds us of the science fiction film „Arrival“ by Denis Villeneuve with its alien heptapods in the leading role, which once painted mysterious messages in the fog with ink, and were deciphered for an entire film.

What’s coming? There are wide open arm scissors, arms like water pipes, no, forget it, no more ice and water associations, no crabs, no penguins, nothing. A plantlike corpus emerges – a vegan group, moving like sea anemones in the current or like reeds in the wind. The light gets a little brighter, the music a little more awake – and already we find ourselves in the middle of a competition for the most beautiful group choreography of dancers tightly planted alongside each other. Sharon Eyal and Gai Behar from Israel have done it much better for years to the music of Ori Lichtik and also managed this with much more dramatics, complexity and more furious than Christos Papadopoulos to the almost meek composition of Giorgos Poulios. It is, from here on, a decorative group charade, dressed in strikingly shiny black costumes by Angelos Mentis, that leave the eye to wander over an anti-Antarctic landscape in a storm of basses and wry organ dramatics. Choreographically, swarms are formed in the style of biomechanical modernism; one thinks of highly decorative still lives with sedentary inhabitants of a coral reef celebrating themselves in the stream of the zeitgeist. Everything rolls off one’s own eye until … until it is blinded.

Papadopoulos does not go that far – but here, with headless folkloric dances in the finale, he escapes this irritatingly-willfully false start and the inevitable comparison with Eyal/Behar, and finds, in the very last ten minutes, his own signature. These last ten minutes are worthwhile the applause. 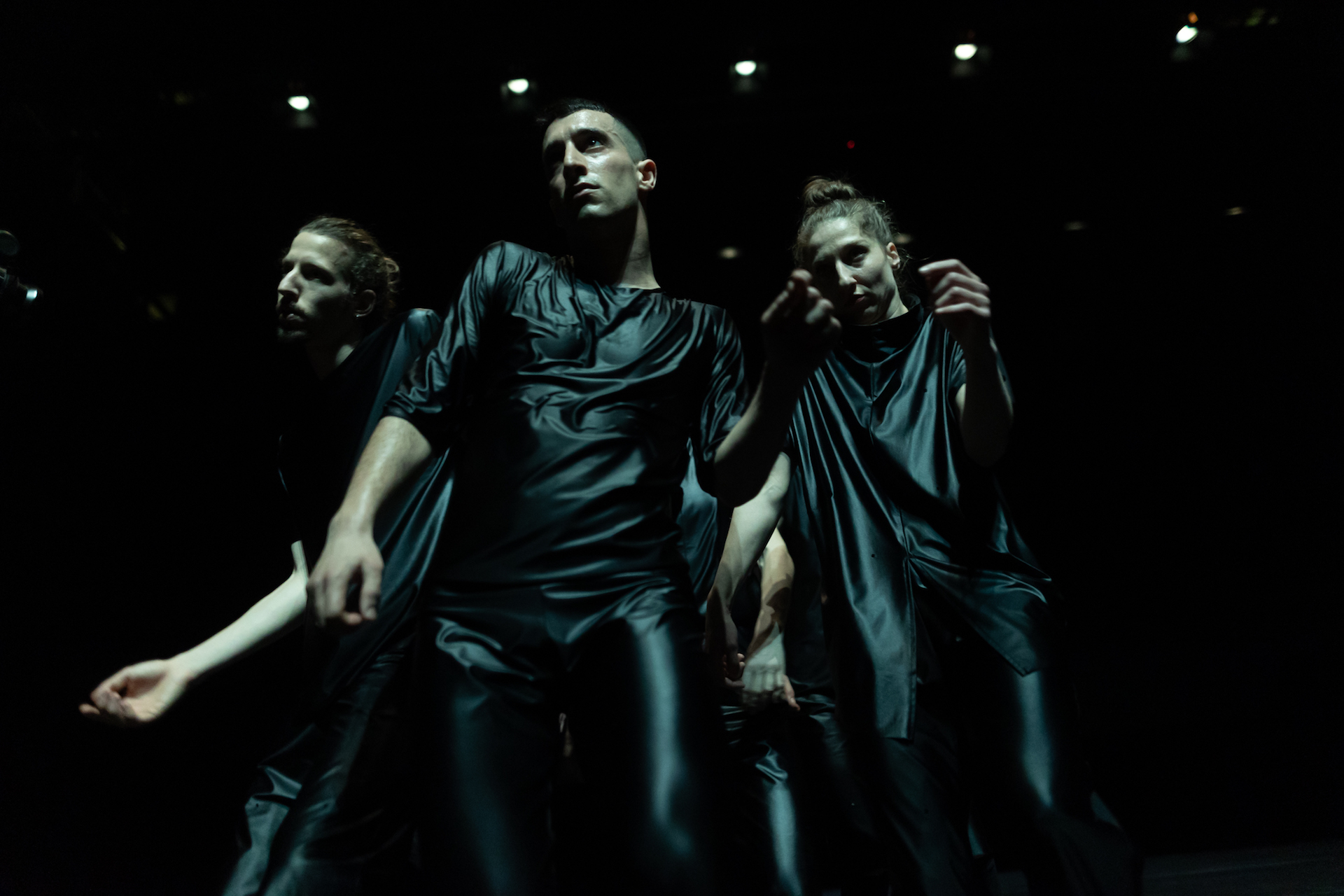