It is a remarkable evening of dance and this in many respects – having had its premiere as a new production (we reviewed) on April 9 of this year in the Wuppertal Opera House, the piece is now – with an alternative cast in a second premiere – able to touch deeply.

Since 2005 (until 2018), „Orpheus and Eurydice“ – following „Iphigenia on Tauris“ and „Sacre du Printemps“ – was the third piece by Pina Bausch in the repertoire of the Paris Opera, which she herself had rehearsed there with the dancers of the world-famous ballet ensemble. In 2008, arte filmed this production at the Paris Opera and produced a DVD after the broadcast, which sold worldwide.

Thanks to Michael Hofstetter, the artistic director of the Gluck Festival in Fürth, Tanztheater Wuppertal Pina Bausch, despite the inevitable comparison with the world-famous „Ballet de l’Opéra de Paris,“ has dared to stage its own revival of the choreographer’s early work from 1975, as we can learn from the beautiful, elaborate and informative program booklet.

It must be a surprise for many that Wuppertaler Tanztheater wins in this comparison, at least regarding the second premiere reviewed here.

On the one hand because the Wuppertal Symphony Orchestra with the opera choir of Wuppertaler Bühnen under the direction of Michael Hofstetter provide the music and sing at an absolute top level and thus create the sound scape in which Gluck’s opera can develop its magic. Also of high international level are the singers of the second premiere reviewed here: Vero Miller as Orpheus, Ralitsa Ralinova as Eurydice and Maxi Sophie Mäder as Cupid. Their singing, words and presence form at the same time the corpus and interior for the dancers, who are floating as shadows in the underworld. Not to mention Valer Sabadus, who sings the majority of the performances as Orpheus and whose countertenor is able to create an effect in his best moments that was probably attributed in mythology to the singing and playing of the lyre of just that Orpheus.

On the other hand, it is because the dancers of Tanztheater Wuppertal carry the language of Pina Bausch within them like their DNA. This is true even though Bausch’s „Orpheus and Eurydice“ was created at a time when the choreographer had yet to invent dance theater as we know it from her now. And yet it seems to be tangible already here. Even if the movement language in this work still contains clear traces of modern dance à la Martha Graham in its pure form or classical lifting figures from ballet,  Pina Bausch already develops her wonderfully flowing movement sequences over long stretches, which in her later works can only be found in the solos of their dancers will be seen..

Unlike the corps de ballet of the Paris Opera, which is able to multiply movements with great precision and reproduce them synchronously, as if each body was the duplicate of another, the Wuppertal dancers, for all their movement precision, offer a breathing organ made up of many individuals. This creates closeness and identification, also as a group, out of which short solos can and may emerge again and again.

Just like the vocal soloists, the wonderfully credible Luiza Braz Batista as Eurydice and Tsai-Wei Tien as the youthfully fresh Amor are able to convince in the dance. Naomi Brito as Orpheus can only be described as outstanding, not only because she has a great dance technique but because her Orpheus is hers and she is at no moment in danger of copying Dominique Mercy, who created and shaped this role.

In her dance opera, Pina Bausch did not aim at creating the myth of “Orpheus“ dancewise, as it had been characterized by Ovid, among others, but rather developing the mythical figure of “Orpheus“ who thereby becomes each of us, as the program booklet so excellently elaborates by a quotation from Mariama Diagne’s wonderful book „Schweres Schweben“, published last year by transcript-verlag, which deals with the qualities of gravity in Pina Bausch’s „Orpheus und Eurydike“. *

If everyone is „Orpheus“ for Pina Bausch, then there can no longer be a division into different genders. For the choreographer it is much more about love as such, about its loss, mistrust, suffering. It is also about secrecy, despair, helplessness. And about the ability of letting go. 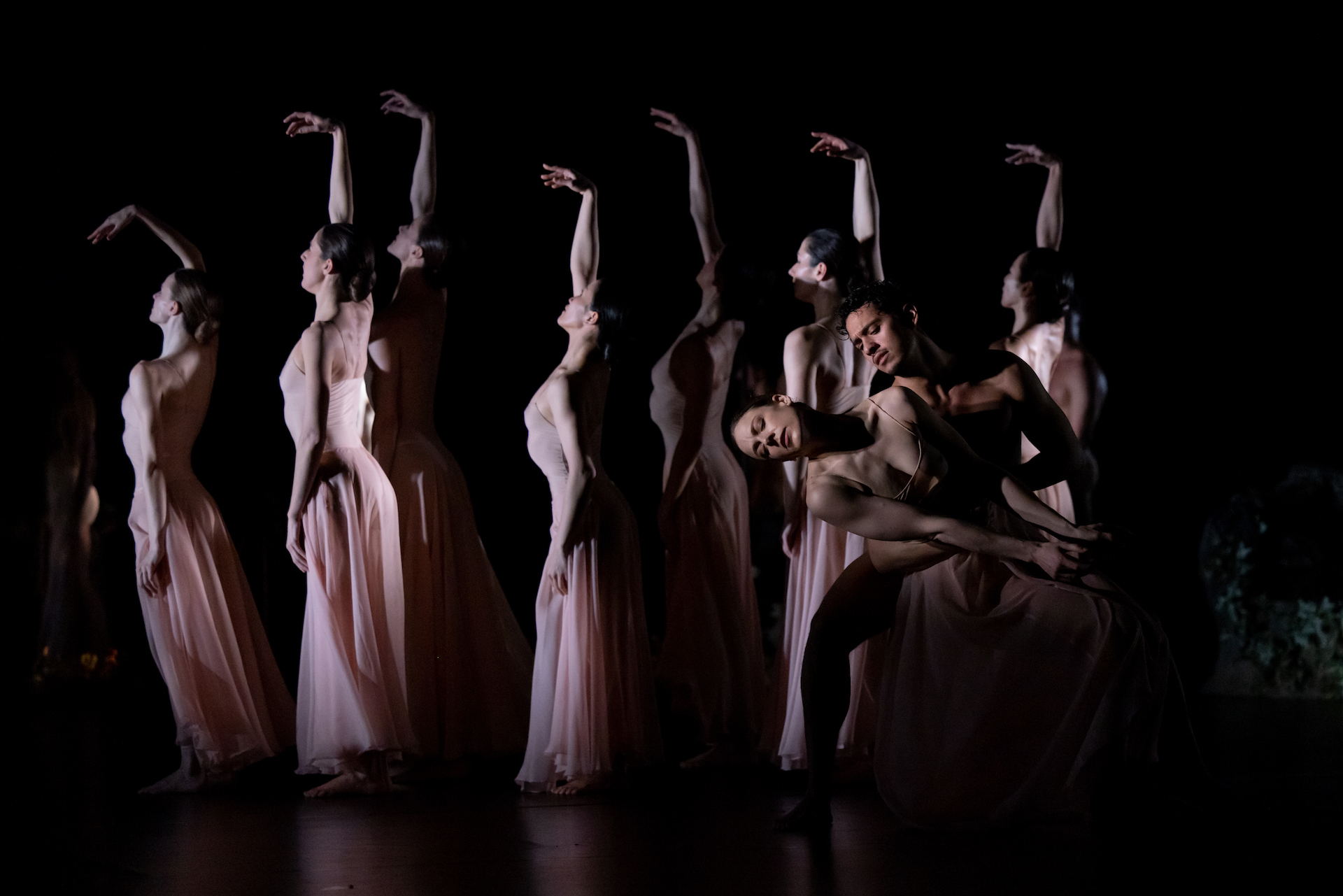 With Pina Bausch there is no happy ending, just as there is no overture. She begins in the midst of the suffering of the loss of a loved one against which her Orpheus, that is, us, will struggle in vain for more than two hours.

Mourning, violence, peace, death – Pina Bausch has divided the three acts of the Gluck opera into these four tableaus in her production, and Rolf Borzik has created the impressive scenography for it, which in death presents only bare, steep, white walls – truth perhaps?

Unlike William Forsythe, who also took up this theme, as his first full-length ballet, only four years later with the Stuttgart Ballet and staged the underworld as the interior of an insane asylum where there was no recognition but only despair, this world appears in Pina Bausch’s Third Picture, entitled „Peace“, as a place of possible harmony, from which Orpheus wants to bring Eurydice back. But to where?

For Pina Bausch, the horror of death manifests itself at most in the transition from life to death. She calls this second image violence, which is determined by the representation of Cerberus, the three-headed hellhound, who in mythology had to watch out that no living person enters the realm of the dead and no dead person would leave it. In Bausch’s work it is embodied by three figures in heavy butcher’s aprons who take care of the „newly arrived dead ones“ or tear apart those who cannot have entry to Elysium, the place of the blessed, as they hang on to their lives and burdens like the threads the choreographer makes them weave like a labyrinth, tied to towers of giant high chairs that might symbolize the life goals of the deceased. Three times the butcher’s apron wearers use symbolism reminiscent of Anubis, the ancient Egyptian god who guided the dead. A symbolism that Pina Bausch will revisit almost thirty years later in her magnificent piece „Ten Chi“ (Heaven and Earth), in which she deals with death again.

Benchmark is the living work of a great artist

It is inspiring to see with how much joy and skill the ensemble (backup by 11 dancing guests) is able to dance and interpret this early work of the choreographer. It is hopeful to see how competent this excellence is passed on by ensemble members of earlier generations who helped creating this work. It is fascinating to see and experience the high level of international artistic ability that is gathered and available here in Wuppertal when there is courage and vision, even if the impulse occasionally, like here, needs to come from outside.

To cast Orpheus with Naomi Brito as a woman and transgender proves to be a successful idea. She is not only an outstanding dancer of world class but also able to move the audience deeply. Love does not exist without pain and suffering, and in truth Eurydice is not dead but has died in Orpheus, according to the choreographer.

Only at the prolonged applause and standing ovations the audience will become aware of how vulnerable and exposed Brito had accepted to be for this role: for the acceptance of the applause, she put on a T-shirt to cover her naked upper body and her nudity. 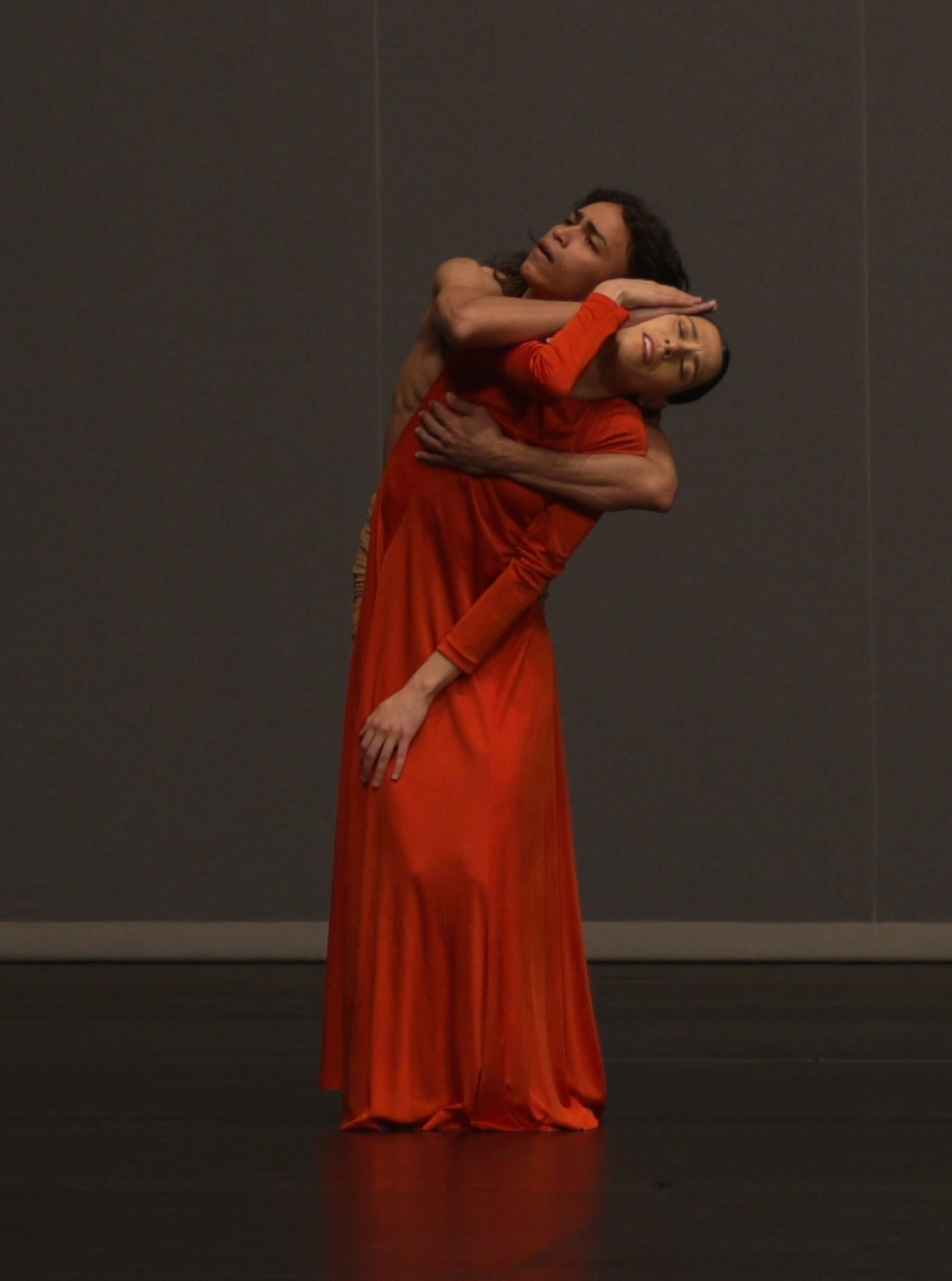