Dance is for dreams. For those sweet and peaceful ones, for the wild, for those full of fear,  disgust, full of lust, sex, chaos, struggle, for those of freedom and a good life. Therefore, with its title, the dance theatre artists wish you a goodnight, no: a Solidar-noc, a solidary night. The German interpretation of this wordplay title comes along more nasty: Solidartot, solidary dead. As if it was at its end or buried, this thing with solidarity and the union Solidarność. And as if it was now spooking through nightmares and fantasies. A ghost sitting on the fence of opinions.

After the award winning “Jewrope“ the artistic team of Bodytalk, Yoshiko Waki and Rolf Baumgart, based in Münster, cooperate now for a second time with the Polish Dance Theatre of Poznan and with its 13 dancers worked and constructed around the historical topic of “solidarity“. They overloaded the one-hour-piece that premiered in Theater im Pumpenhaus, full of hope – or desperate. Somehow it is this Poland of the last 40 years and today – with the “solidarity“ getting lost on the way bit by bit. Just like in reality. 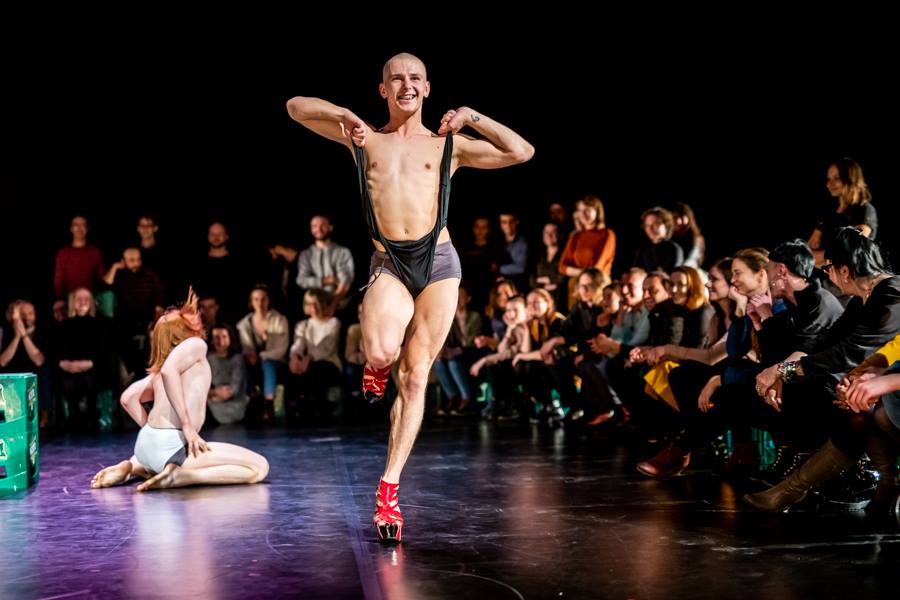 The constant elements of this piece are the green beer crates contributed by Mirek Kaczmarek. The dancers use them to represent the steady state of transition – from quickly constructed stairs, a footbridge that is namely formed while walking on it, a small tower, a patchy wall, further factory signs and a sitting circle and a table of the last supper. The crates are labeled with “LECH“, a suitable joke on the occasion: the strike and the foundation of the union Solidarność in Gdansk in 1980. Lech Wałęsa was the leader,  a declared hero and later president and Nobel Prize winner. “Solidaritot“ however depicts the other story of its beginning: short texts of the former crane operator Anna Walentynowicz whose dismissal set the starting point of the strike. One of the female dancers on her beer crate tower calls her in the audience. Her colleagues explain how little they had learned about it in history lessons at school. Or that the author is a liar. That you actually cannot know exactly what happened back then. This gives shivers to the German audience members. Without direct references or even criticism of the polish governmental policies and ideology, the piece manages to imply which climate it creates. 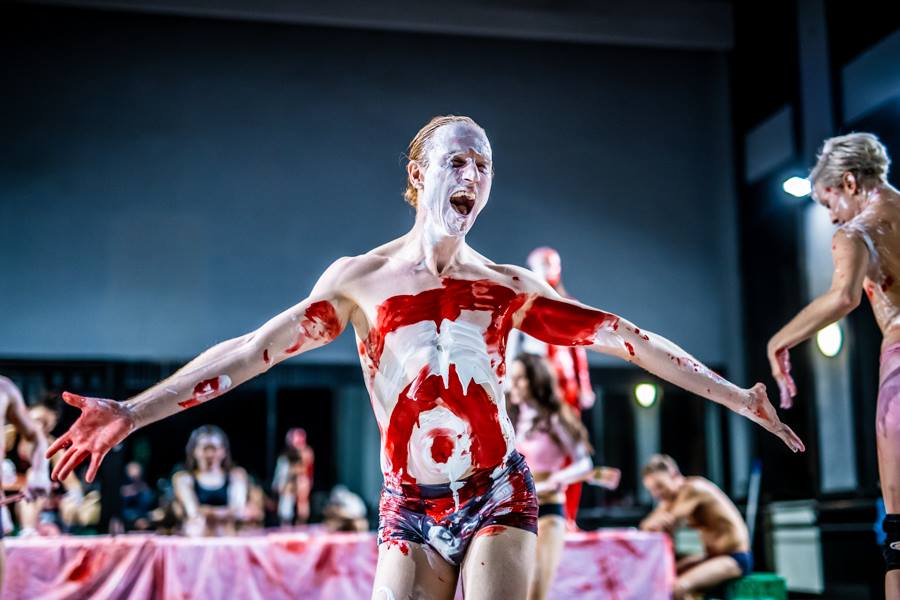 The solidary night is opened in an idyll of recorded piano chords and cello, a harmlessly swaying waltz that the dancers follow in broad steps, to the right, to the left, scooping air with der hands, easy going, throwing legs and arms up, inserting some beautiful elements of partner lifts and forming a curved chain hand in hand. The general neatness and bustle is already questioned when two dancers lift a third one so he can walk in the air over a line of colleagues lying down on the floor. It works via agreements where not everyone can take the same role. Further, it is a reference to Pina Bausch, also later in a scene when individuals are stepping or pushed out of the center of an anxious clump of dancers.  Just like in “The Rite of Spring/Frühlingsopfer“. Was Anna Walentynowicz a victim?

At the time she was sent to prison, to men’s prison. Afterwards she did not have any money, just a destroyed apartment – following the saying of the text fragments of one of the female dancers who is at first praised and raised as a heroine by the others. She wants to expose the legendary jump of Wałęsa as a lie. The strike leader is not represented as a person but – much more threatening because untouchable – as a symbol or gesture: with the victory sign, the V of index and middle finger or two fingers under the nose marking his famous moustache.

Then follow short fighting scenes, first individually then in synch by the group. Percussions, bass tones and live saxophone by Damian Pielka and Max the Maxofon while the dancers are boxing, kick with naked feet, tear, walk in crouched positions and open up as if they were shot, throwing their arms up and to their back – a reminiscent of the conflicts back then where protestors were shot. Nowadays these kind of choreographies made the London choreographer Hofesh Shechter the hero of contemporary dance. But the smart piece – that you wish for would go big stage – goes quickly back into history. A big white tissue transforms from folkloristic toy into a flag of peace then into a demonstration banner. Red color comes into play, nicely ambiguous: as blood on the bodies and signet of communism. 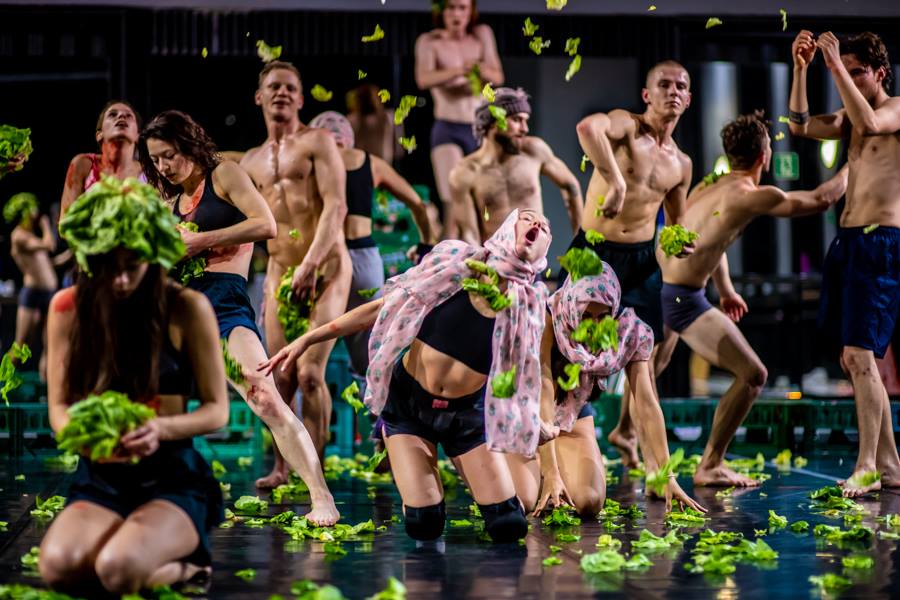 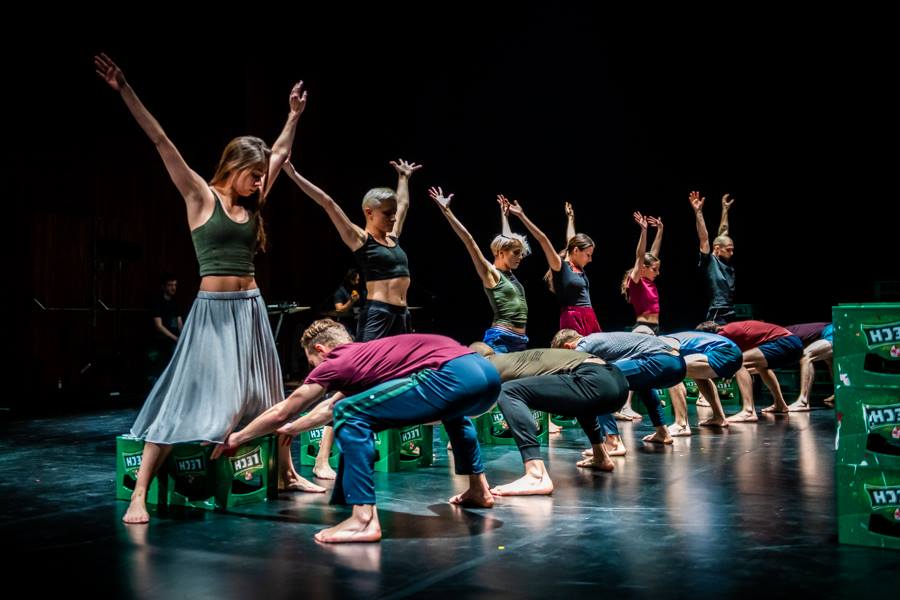 Later on the dancers also slugde white to their skin so the national colors of Poland stick to their bodies. Some in form of a target on the belly like the “Otpor“ sign of the demonstrations in Yugoslavia, others in color gradients on the core of the body or to emphasize the breast of a half-naked woman or becoming a pink mix. They celebrate a nature cult in manyfold and imaginative ways with heads of lettuce. Apropos pink: One dancer, wrapped majestically into a white cloth with a thurible in his hand, tells the very detailed story of his (or one) childhood as an altar boy, the proud parents and the banishment from his family when he told them he was gay. The scene on homosexuality is illustrated with super cliché posing and group tupping with men only. Horror fantasy of the parents? Bad taste is here artistic decision. It hurts and kills a bit the question of solidarity of the piece. Or is it posed at the exact right spot today. Same rights.

That son, dancer, sets an immobile counterpoint as muted figure in the orgy with decorative cheerleader framing. In all that Bodytalk tumult one may notice the clashes, the ambiguous, heartbreaking when looking more closely. Today’s labour migration is also being touched by “Solidartot“: the dancer who came from the Ukraine to Poland, or Mariola Noga, as a special guest of the performance who moved to Germany to work as cleaning lady and receive benefits for her children. Also a form of solidarity: among EU states. Its value is in danger. The word is almost forgotten. Salad won’t make you full. 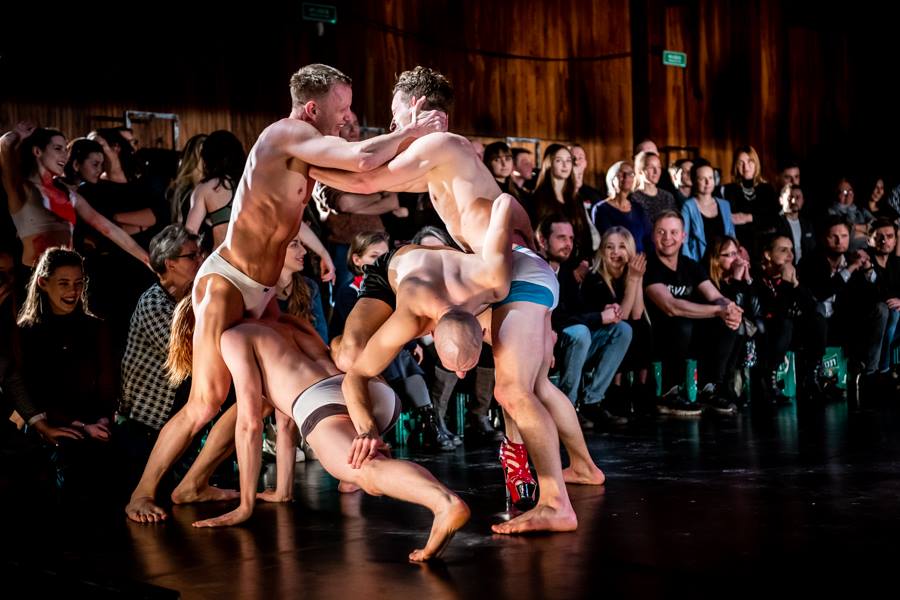