He was a beautiful person…

How do you want to be remembered?

How do you want to be remembered?
There is a legend that after death man is transported to another world by the thoughts and memories of those who knew him.
A person’s death seems so factual and yet life is anything but that. Man lives on in what he has achieved and above all in the thoughts and memories of those who are left behind.
Thank you to everyone who has let us be a part of their commemoration.
It’s a „farewell“ not a „good bye“…

He was a beautiful person…

Sadly Matthias Burkert, our colleague from the Tanztheater in Wuppertal died on 27th of October 2022…He was a beautiful person. A quiet gentle man who was for many years part of a small circle working alongside Pina. Matthias was responsible for the music. He had a broad range of musical interests which were reflected in Pina’s many pieces. Anyone who has seen a performance by Pina Bausch knows how important music was in her dance.

I remember Matthias having had a quiet sense of humor during rehearsals and on long travels with the company. On one occasionI had taken a cassette tape back from Japan of a punk rock band. The music was quite weird and we laughed a lot because the only words understandable were “monkey monkey”. But Matthias encouraged me to use it for a rather crazy scene and felt it could work incorporating it into the music collage with other sounds which later became the opening scene of “Ahnen”.

Thank you for opening our hearts through your passion for music, for happy times and friendship within the dance theater family.

We will miss you Matthias.

It is So You, dear Matthias

You have chosen that day,
when the sun was shining,
the birds were singing,
with the blue sky in Wuppertal
to leave,
to say goodbye to us.
With so much love, So much warmth, So much support and strength,
All from your heart.
Enjoy that „better place“, dear Matthias.
I will always miss you…
.
Tsai-Chin Yu
.

A YOUNG MAN WITH AN OLD SOUL…

When I joined Pina Bausch‘s company,
Matthias was just 34 years old.
A young man with an old soul. He was funny, witty, caring and very sensitive.
Although utterly honest , like everyone in the 80’s Pina Bausch company, like my other colleagues he was mysterious and deeply dedicated to Pina’s art.
When he listened to music his whole being would be immersed into a universe that belonged solely to him.

His collaboration with Pina was so unbelievably a mix of intuition and surprise. He intuitively knew what she wanted or surprised her and inspired another energy to the work.
This unspoken dialogue between Pina and the artists she surrounded herself with was the essence of her work.

The music that Matthias contributed to Pina’s work has changed my life and the lives of many others.
It has brought cultures together and united Era’s whilst creating unforgettable emotions and pictures that have shaped us as performers and human beings.
His knowledge of Pina’s work was immeasurable.
He played piano every morning for class, appeared on stage in numerous productions and attended every rehearsal, he was a constant in our lives. A great memory were the numerous ‘House Concerts’ that Matthias organized. He was so inspired by new and old talents , effortlessly bringing them together.

After Pina’s death, like many of us, he suffered to find his place and get the recognition he deserved. At times being overlooked and underestimated due to his humble presence, which Pina installed in all the artists with whom she worked.
He was often very fragile and lonely in the last years also dealing with diabetes since decades.

We have lost a great soul, a human being with an enormous capacity to love, who was part of the heart of Tanztheater.
I will miss his insightful reassurances and sometimes harsh but knowledgeable observations of Pina’s work.

Personally, with great sadness and infinite gratitude I say farewell, dear Matthias.
You will be immensely missed in your human form, but, your spirit lives on in the unforgettable music and the love and memories you shared with us.
Future generations will be inspired by your selfless contribution and beauty you have gifted us.

MATTHIAS! HERE’S TO YOU!
AHHH! LOOK QUICK!
ANOTHER SHOOTING STAR!

You,
There’s a scarcity of ones like you.
Not so many , who could create that kind of magic.
On a drum, on a drehleier, on a mouth harp, a piano, on an accordion, a harpsichord or through your own song. The list is endless.

To you!
A master musician of every sort.
A major giant extraordinary collaborator and contributor to this legend.
we call it –
Tanztheater Wuppertal.

You,
A sparkle that glimmers, a light that shines on.
Become extinguished? It certainly will not.

Full of multilayered imagination.
You had a poetry for life.
Into that, you played and dived in , unceasingly.
Your abundant and full faceted knowledge of which you so humbly shared and bestowed, was that that made you thirsty to have more. More knowledge, more capacity ,more freedom.

You!
A precious gift, consisting of and not only, presence, sound, sensitivity, humanness.
That’s why you at times, had an unexplained tear in the corner of one of your blue eyes.
Through that eye or the lens of your camera or your written word, you appreciated deeply the wonders of this world .

You,
Were at the piano practicing even before we arrived for class.
Was it the boogie woogie you were playing? Or
Beethoven sonata 110, Adagio Hammekalvier, or just dense polyphonic chords, scales and etudes?
Ahhh!
your discipline, that was your drive and your verse.
You kept us wondering.
One would stay with you – attuned!
Yes, you requested, silence ,for the sound to rise.
Shhh!

You,
Your love, and your understanding for sound,
Sound! Their textures their meanings ,
This understanding, transported everlasting uniqueness to Pina’s work.
We hear you in every creation.
Your melodies and choruses carried back from distant lands made us dance and unite, even shiver.
You impressed us again and again of just how big the world is.

On every tour you would enthusiastically search and find musical instruments of the most unusual kind.
That was something! It delighted us.
That moment you played them in a production became iconic, jewel-like, enduring.

Matthias,
Yes, you were quiet and gentle , thought filled.
Yet the intensity of your yearning to find, to share, to give, to search again, it was this energy that could move mountains.

Your glance ; sincere, your eye and ear judging with acutely sharp unhesitating vigor!
And most often, it made the difference .

You,
Painted the rocks you found that were shaped like animals and rainbows. You even painted a curvy stone into a fluffy white cloud.

You,
Planted gardens, gave homage to forests and sand dunes.
You,
had those smiles and giggles, that somehow always resonated with someone in the space, or with others ,not at all.

You,
A teacher, refined and skilled in your Craft, ever expanding your expression through your musical and human talents.
You invited dialogue and exchange with so many, and it was exactly that passion that polished even more your creative endeavors.

Matthias!
You have gone beyond, you have persevered with dedication to what you truly believed in and admired.
Our admiration for you can only grow.
Your legacy in its greatest and most subtle manner will inspire those who are already on their way to meet you now.

So, dearest treasured friend and soul ,

Here’s to you!
In honor, with profound heartfelt love.

You,
Would find a melody for that!

Your Symphony will anyway forever resound!

By the way,
Forever is composed of many, nows.

Till we meet again,
My hands join together, I tilt my head towards the earth. 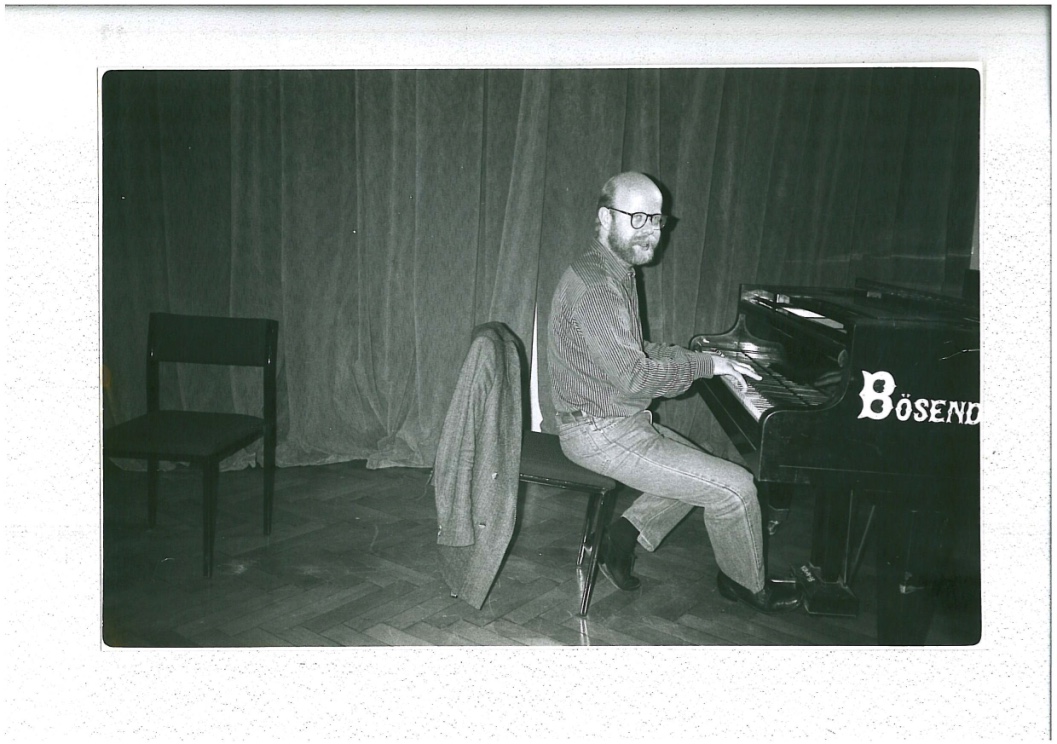